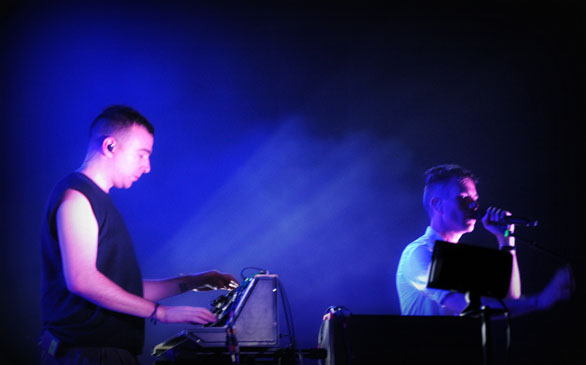 Sydney, Australia’s reigning electro outfit the Presets make an L.A. pit stop before wowing crowds at Coachella and quickly prove that electronic sounds delivered by a duo needn’t consist of boring knob turning. The Presets can whip a crowd into a frenzy in a matter of moments, and the entire affair is nothing less than a party.

They immediately launch into “Eucalyptus,” and their charisma fills Club Nokia from floor to rafter with Kim Moyes rocking the live drums and Julian Hamilton projecting his commanding aura over the audience as he twiddles with a series of synthesizers. The audience, too, leaps into action; if you aren’t dancing at this show, check your pulse. By the time the chorus hits, there’s a strong pogo spreading throughout the room, fists pumping to the beat.

A techno-fied, less harsh version of “Down Down Down” follows, keeping up the momentum. “Talk Like That” turns up the energy a notch, with Hamilton departing from the keys sporadically to leap around the stage and whip the audience into a tizzy. The manic and discordant “If I Know You” proves slightly more difficult to dance to, but this crowd sure does try.

“Yippiyo-ay” proves explosively popular with its heavy vocoder vocals over crunchy synths and driving beat. Next, the evening's only introduction of new material goes over well and may indicate that the duo remains on largely the same trajectory as their previous efforts.

“Together” builds from lovelorn ballad to anthemic proportions. Despite their unconventional sound and song structure, this one is a good example of why the duo have been honored for their songwriting prowess. Their performance here is electric.

The ominous “Are You the One” is carried on a sparse, pulsing synth, and there’s something deeply unsettling about this live interpretation that culminates in a mess of shrieking synth, the audience sharing rhythmic clapping duties. It flows seamlessly into “Aeons” with its Max Headroom-esque stutter vox samples.

“This Boy’s in Love,” one of the duo’s more pop-anchored tunes, leaves audience members dancing ecstatically. Props to the guy behind me, who was practically Hammer dancing – such was his enthusiasm. “Kicking and Screaming” and “My People” finish out the set on a darker note with hammering rhythms that bring this night to a blinding finale.

A brief encore of “Untitled” leaves the sweat-drenched audience satisfied. Despite a lack of new material in the set and a heavy reliance on material from 2009’s Apocalypso, it’s good just to see this band back in action. Here’s to hoping they’ll be back soon with a new release to flaunt.