The Dilemma and More 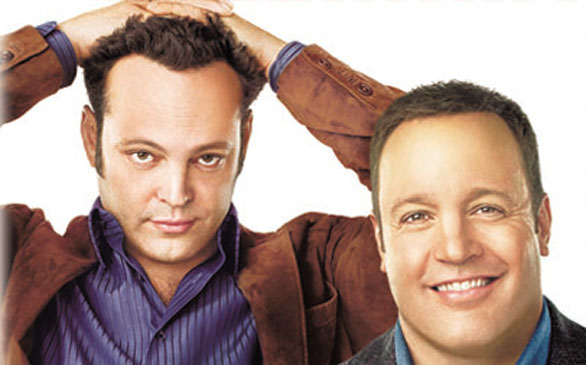 Funny Business: Vince Vaughn and Kevin James star in The Dilemma, a comedy from Ron Howard. Vaughn and James play lifelong friends and business partners whose bromance is threatened when Vaughn sees his friend’s wife out with another man and decides to investigate. Jennifer Connelly and Winona Ryder costar.

Foreign Fare: Based on an unproduced screenplay by comedic auteur Jacques Tati, The Illusionist centers on a fading magician who finds a new purpose in his later years when he falls for a girl in a small village. Nominated for an Oscar, this is a new animated classic from the director of The Triplets of Belleville, Sylvain Chomet.

If Ferris Bueller were an Indian college student he would be the protagonist in Bollywood’s 3 Idiots. The award-winning film follows a charming schemer who falls for the daughter of the university’ s evil dean and uses all his wiles to make the dean’s life a living hell.

From the Vault: Moguls & Movie Stars: History of Hollywood is a seven-part documentary series on the history of the 20th-century art form, from its inauspicious beginnings in peep shows through the advent of television to the casting off of the Production Code’s regulations in the 1960s. Christopher Plummer narrates.

The Idiot Box: Cartman and the gang take on social networking and bring the belly laughs in the epic three-part Mysterion saga in South Park: The Complete Fourteenth Season.

Eddie Murphy provides the voice of a superintendent for a housing project in the Emmy-nominated claymation series The PJs: Season 1.

Party Animals is a BBC miniseries which, like “The West Wing,” follows the people working behind the scenes of national government. While politicians make speeches and shake hands, these are the real people involved in the nitty-gritty machinations of politics.

“Upstairs Downstairs” is not so much a remake as a continuation of the classic British series with Jean Marsh returning in her original role 40 years later.

The latest in a crop of breathtaking nature documentaries, Human Planet takes you around the world to examine the most adaptable animals in history, people. Breathtaking photography shows the unique ways in which humans fit into their environment, from the frozen tundra to the urban jungle. John Hurt narrates.

Magic’s comic duo returns for another season of muckraking in the Emmy-nominated Penn & Teller: Bullshit! Eighth Season. Using their knowledge of carnival tricks the pair offer much-needed reality checks on subjects like Area 51 and teen sex.

Under the Radar: Inspired by several real cases, Megan Is Missing follows one teenage girl’s search for her best friend, who disappeared after she went to meet a boy with whom she had been chatting online. Told entirely through Webcam footage, handheld video and news reports, the film shows that even as our lives are made increasingly public, peoples’ motives remain as shadowy as ever.

The Horror! The Horror! South Korea continues its output of intensely dark, expertly made thrillers with I Saw the Devil. The director of A Tale of Two Sisters helms this story of one man’s moral descent in his quest for revenge after a loved one is killed by a serial killer.

Sean Bean stars in Black Death, a medieval mystery set during the bubonic plague in which a monk arrives in a village to investigate reports of the dead rising from the grave. Christopher Smith (Severance) directs.

Blu Notes: Arguably Sergio Leone’s greatest film, Once Upon a Time in the West is an epic, operatic revenge western as big and bold as anything Leone made. Henry Fonda, Jason Robards and Charles Bronson star.