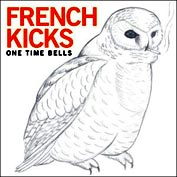 The boys in French Kicks have their look down pat——unlimited uses of button down shirts, v-neck sweaters, and dark blazers. At first glance, one might write off the pretty faces and slouched preppy clothing as just another nicely packaged garage rock foursome, ready to hit the pages of NME in full pinup fashion. Yet, as soon as lead singer Nick Stumpf sat down at the drums, one could tell something was awry. Don’t be alarmed: Mr. Stumpf is no Don Henley. and French Kicks prove to be quite intriguing.

Their sound is full of keyboards, drums, and Stumpf’s vaulting lyrics. Guitarist Matt Stinchcomb and bassist Lawrence Stumpf (yes, another band of brothers) kept themselves to one side of the stage, remaining rather unaffected by the animated Stumpf, whose bobbing suggests the jointlessness of a dashboard hula girl. French Kicks tread that fine line between being unfocused and diverse. While it is encouraging to see a band that is willing to experiment far more than its counterparts, it is also apparent that when they are more focused and concentrating on melodic hooks and quirky drumbeats, the Kicks are far more successful.

Further refinement and the definition that comes with time can only serve to help French Kicks and gain them the following they deserve.