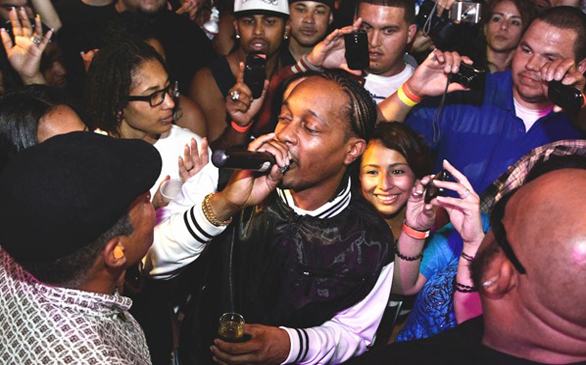 Even at the age of 41, David Marvin Blake has not lost a step on the stage or the mic. And I am not just saying this because we carry the same name; this is just a fact. If you doubt me, simply catch MC and record producer DJ Quik in a concert anywhere. This guy prolifically delivered his rap verses and sounds at Key Club with no problem whatsoever.

Originally from Compton, DJ Quik brought pride to his roots for the near two-hour show. He performed tracks from the new album, titled The Book of David, and he showed why rap fanatics are enormous supporters of his entire repertoire. He raps energetically with no fear, and even dances like a true professional.

In the summer of 1990, DJ Quik signed to Profile Records, reportedly as the label’s first six-figure signee. And now I know why. This rapper is solid and valuable as gold. His tracks “Down, Down, Down” and “Let’s Get Down” with Tony! Toni! Toné! excited the crowd-packed venue. The hits “Tonite” and “You’z a Ganxta” completely thrilled people. “Tonite” is an upbeat tune that became popular on the Top 20 R&B singles chart during the ’90s. It features an enticingly sexy chorus from Janet Jackson.

Bizzy Bone and other rappers made guest appearances throughout the night. The public became receptive of that strategy. Each and every attendee loved it. This was a plus!

DJ Quik has been known to produce successful beats in collaborations within the music industry, including Snoop Dogg, Whitney Houston, Mariah Carey, Janet Jackson, Xzibit, Will Smith, Jay-Z, 2-Pac and Ludacris, among others. The Book of David features appearances from Kurupt, Ice Cube and Bizzy Bone. This is the first studio album that DJ Quik has released since 2005.