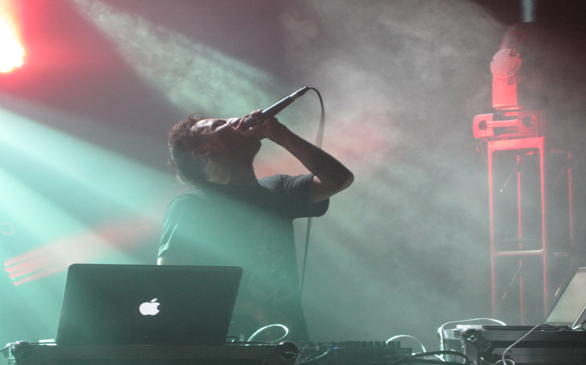 With each new DJ that is born these days, the boundaries within electronic music are becoming more and more endless. And as the artform continues to advance at a furious rate, West Coast beat makers are prominently pushing their own creations into unchartered waters. Those in attendance at the historic El Rey Theatre on April 22 got to witness that firsthand from two up-and-coming acts who have quickly built a niche for themselves amongst the industry’s most distinguished names.

Denver-based producer Alex B, performing for the past four months under the moniker Paper Diamond, energized a room full of people with futuristic synthesizers and 16th-note hi-hat patterns in tracks that ranged from glitch hop to break beat — all through the use of an iPad. Whether it was songs off his first EP, Levitate, or his remix of Kanye West’s hit single “POWER,” Paper Diamond’s minimalist setup didn’t prevent the vibrant crowd from bouncing in every which direction during his hour-long set.

But when it was MiMOSA’s turn to press the play button shortly thereafter, the Bay Area product made sure to turn the energy level up a few more notches on the dial. Digging into his latest work from the free-to-download EP, 58 Degrees, MiMOSA mesmerized the dance floor with a heavy dose of experimental dubstep while fusing glitchy hip-hop beats with trippy laser samples that had you teleporting to another planet for a few minutes.

It’s been that unique blend of electronic subgenres that has made MiMOSA successful in the electronic music scene at such a young age, having already played in sold-out venues across the country with the likes of Bassnectar, Pretty Lights, Rusko and Flying Lotus. Now, with the recent launch of his own label (False Idol Music) and more digital releases on the horizon, MiMOSA’s continuous innovation and raw energy in the studio and on stage has him setting the bar high for his colleagues to reach.