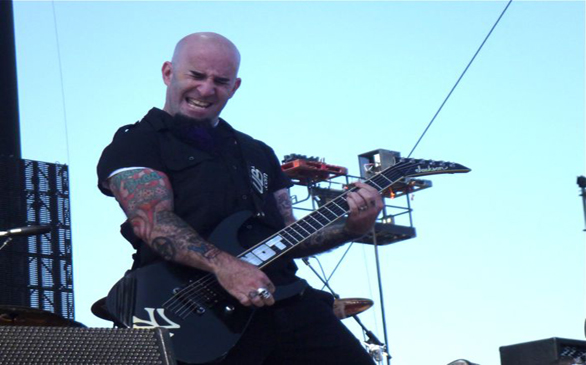 Thundering through the desert, over 50,000 fans trekked to a small town that had just been invaded by a mass of music fans. But this was a different type of show. This was something special.

A sea of black clothing made its way onto the Polo Grounds in Indio, Calif. to see a first of its kind event. Not since Guns N’ Roses teamed up with Metallica years ago, has there been this much anticipation for a hard rock show in the United States.

The lineup of New York thrash pioneers Anthrax opened the show with the most appropriate tune possible, “Caught in a Mosh,” and as soon as the song kicked off, the crowd became alive. A push of fans to the front of each barricade closed out any chance of catching a breeze. From this point on, the only way you were getting some fresh air was from the wind generated by the scattered mosh pits across the dead grass or floating across the masses in attempt to crowd surf your way to relief. A very thankful Anthrax left the stage and the sun began its fall from high in the sky.

Next up, was Megadeth, the speed metal icons who plowed through some of their most powerful songs one after another. As their set began to close, their mascot Vic took the stage for one final look at the screaming fans.

The sun had now set, but the sky was lit with the fire of the blowing sand and dry clouds. An eerie glow took over the stage, and the main course was served up, raw and deadly … Slayer gripped the audience, now sweaty and out of breath, and managed to whip up one of the hardest pits of the night. Bodies slammed into each other and almost every fan screamed the lyrics to the songs – this instantly wiped the memories of Coachella from the grounds’ memory.

Blasting out “War Ensemble” right off the bat and then getting into “Raining Blood,” these men showed people why Slayer is one of the most powerful bands to ever take a stage. Even at the end, Jeff Hanneman came up to play, despite almost losing his right arm to a flesh-eating disease from a spider bite. The final song rang out across the desert like a cry from below; “Angel of Death” blew the new fans away and rewarded those that have been with the band for years. Plus, it’s pretty amazing to listen to Slayer in the middle of the desert as the sky turns to black.

Finally, the time had come for the main event. Metallica was ready to take the stage. A clip from The Good, the Bad and the Ugly played on the giant screens flanking the stage, then, silence. The crowd began to chant. Just as the pitch hit a fever, Metallic blew up the sky and launched into a two-hour plus set with “Creeping Death.” The chants went from “Metallica” to “die, die die!” as James Hetfield beckoned the crowd to sing along with him. This ode to Passover is one of the band’s most notorious songs, and as soon as it ended, they didn’t pull back. The beating just kept coming with songs normally saved for encores, now placed in the main setlist: “Master of Puppets,” “Fade to Black,” “One,” and they even played the instrumental “Orion” with a very sobering moment taken for fallen bassist, Cliff Burton.

There is only one band on the planet who can pull from so many songs and perform them all this big. Metallica has grown as a band over the years, and their albums have varied in arrangement as well as reception from fans, but the one thing that has never changed: the live show. With fire bursting out of the stage and more crowd interaction than any other hard-hitting band, the place were rightfully whipped into a frenzy of gigantic proportions. Fans burning their shirts and creating bonfires and whipping up the earth in pits across the grounds are the true signs that you’re doing something right.

The lineup for this show was perfect. And seeing all the bands come back out on stage to throw down on a cover of “Am I Evil” was the icing on the cake to this devilishly good time. Thanking the crowd over and over again, Hetfield and the rest of Metallica let the fans know how important they are in keeping one of the purest forms of music alive and thriving into the future.