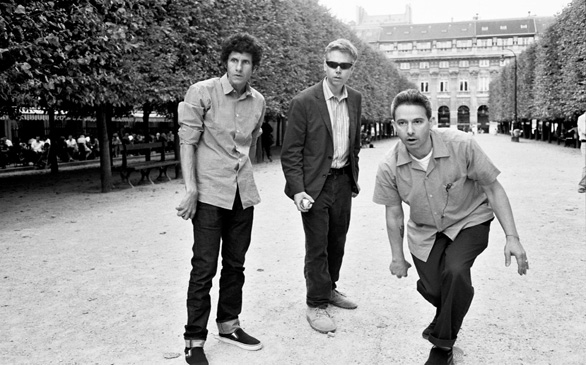 Still able to have a recognizable name after more than 20 years in the music world, the Beastie Boys can be credited for having created one of the most timeless party anthems and fusing rock and hip-hop seamlessly like hardly any other group can. If you’ve never heard of them, you’re missing out. Rapping about everything from galactic experiences to Paul Revere to the challenges of a home life to girls, this trio is something like what your annoying little brother would form with his other rapping friends – except they’re really good at what they do. Listening to them, you get waves of classic rap nostalgia thrown in with authentic rock guitar chords, entertaining asides and lyrics that show a characteristic humor.

Back with Hot Sauce Committee Part Two after four years since their last album, this rebellious trio is proving that not every music career that makes it over the decade-long threshold is doomed to sell out or become washed up. The Beastie Boys are still going strong.

The group’s latest track, “Make Some Noise,” with its music video, has just the right amount of carefree, rebellious Beastie Boy flavor blended with a simple but effective beat to make it yet another installation in a solid career. The Beastie Boys have got enough humor, honesty and fresh beats to keep them afloat without having to give in to the dubstep craze or trading in their crisp sound for the norm of over-production.

The fact that they’re old enough to be the parents of some of the coming-of-age middle schoolers who might start listening to them just now is absolutely to their advantage. Having already conquered music listeners from the ’80s to today with empathetic tunes about stifling parents and horridly strict households, the Beastie Boys can now extend their fan range to new listeners.

And the fact that their sound doesn’t mold to the changes that have occurred in popular music today only solidified their reputation. For a trio with so much character and such a distinct sound, the smart choice was to stay within this identity. For fans of the Beastie Boys, their new album is good news not only because it is their first in years, but because it serves as a welcome retreat from other mainstream artists whose identities sometimes change with each new album.

Not that the Beastie Boys won’t experience growth, either. Any artist must know that with each new album comes the task of topping the one before and that music fans aren’t necessarily happy with more of the same. The Beastie Boys have to show not only that they can stack up against new artists but that also have something to offer to the generations after the fans that originally danced and rapped to them.

The Beastie Boys have to prove that they can continue to evolve. They have the daunting task of showing that they can expand upon a career that has lasted more than 10 years. But as is obvious with the cameos of current movie stars and the use of stars Elijah Wood, Seth Rogen and Danny McBride to play the Beastie Boys themselves, the group is in tune with the times and fully aware of the place it can occupy within the current music scene.

They bring the nostalgic ’80s persona but also the timeless party life. It doesn’t matter that new technology and unique musicians have arisen on all genres of the music world. The Beastie Boys have created a flawlessly nonchalant image and a sound so distinct that knowing it’s their song on the radio is hardly a difficult task. Because of this, the band stands a chance no matter the competition and basically stands in command of when it wants its career to end. If they had not gotten their persona and sound down so well, they would not be so successful today.

Strict parents and wild parties will always be around, and thankfully the Beastie Boys, whether you choose to listen to their old or new tunes, will be around to help you get through it with a few suggestions of their own.