No Strings Attached and Much More 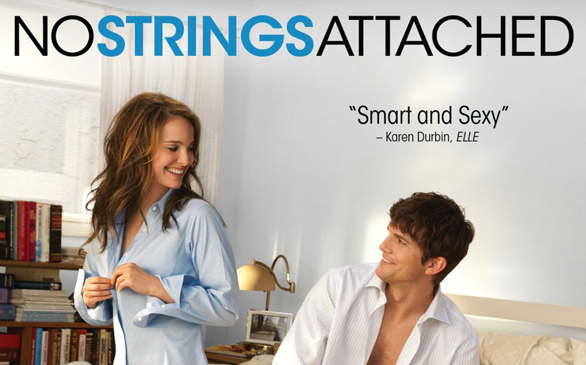 The Majors: Natalie Portman and Ashton Kutcher star as lovers who try to keep things just physical in the romantic comedy No Strings Attached. Ivan Reitman returns to the director’s chair after a somewhat lengthy absence. Kevin Kline and Cary Elwes costar.

Ryan Gosling and Michelle Williams give two of the best performances of the year in Blue Valentine. Cross-cutting between their love-at-first-sight meeting and the present day, when they share a daughter and a troubled marriage, the film is a naturalistic, affecting portrait of a relationship and the difficulty of sustaining love.

Luke Goss (Death Race 2) is a renegade cop who goes undercover in the mob to avenge the murder of his brother in Blood Out. Val Kilmer, Curtis “50 Cent” Jackson and English badass Vinnie Jones costar.

Stranger Than Fiction: Always-controversial filmmaker Oliver Stone sat down for a rare, candid conversation with another divisive figure, Cuban leader Fidel Castro in Looking for Fidel. Stone challenges Castro with tough questions while attempting to paint a truthful picture of the leader and Cuban life.

Under the Radar: Schlock aficionados will appreciate the arrival of the hard-to-find Sledgehammer (1983), which owns the dubious title of first shot-on-tape slasher flick. The disc comes with a surprising amount of bonus features, including commentary by director David A. Prior and featurettes with Destroy All Movies!!! author Zack Carlson and the operators of Los Angeles’ the Cinefamily.

From Criterion With Love: When one thinks of cinematic mash-ups of comedy, crime and romance, the name Tarantino undoubtedly comes to mind. But, like most Tarantino trademarks, someone else did it first. Jonathan Demme’s Something Wild (1986) maintains its originality despite a couple decades of rehashes. Melanie Griffith stars as a quirky free spirit who takes a button-down conservative (Jeff Daniels) out for the time of his life. But Griffith’s dark past, in the form of Ray Liotta, catches up to the pair.

Blue Notes: Often named one of the greatest comedies ever made, Billy Wilder’s Some Like It Hot stars Jack Lemmon and Tony Curtis as a pair of cross-dressing musicians on the run from the mob. Along the way they run into Marilyn Monroe, and Curtis hatches a plan to woo her that includes a hilarious Cary Grant impression.

Purgatory: Despite Blu-ray being well on its way to becoming an established format, there remains a slew of classic films (many by major filmmakers) that still have not even come to DVD and are at risk of being forgotten.

Milos Forman’s English-language debut, Taking Off is a terrifically funny look at the generation gap that exploded during the 1960s. The hilarious Buck Henry stars as a beleaguered father who wanders blindly through the counterculture in search of his daughter.

There is hope, however. Criterion has announced its upcoming releases which include the neglected Roman Polanski masterpiece Cul-De-Sac and the long-awaited Zero de Conduite by Jean Vigo.