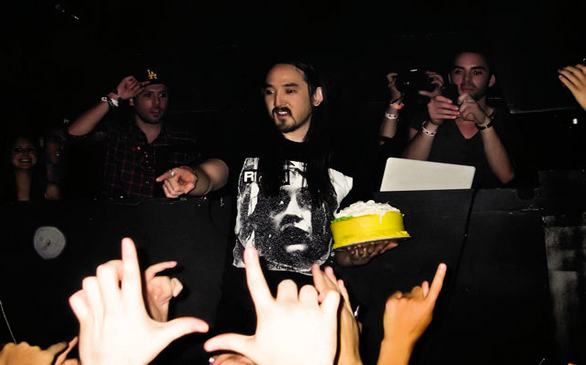 DJs play one of the most vital roles at a party, dictating the music and ultimately, the overall mood of the night. When an event features Steve Aoki as the DJ, it can be confidently assumed that pure mayhem will ensue. Aoki’s recent gig at Hollywood’s electronic music institution Avalon resembled a rowdy frat party but with lasers and an ear ringing sound system. It was the kickoff party for Musication, a new event production group focused on bringing unique events to the college crowd by highlighting college talent and utilizing new innovations.

In addition to Aoki, the night featured a three-way DJ battle between representatives from local universities. DJ Mico (UCLA), DJ Tony Fresch (USC) and DJ Doc P (LMU) all vied for the title of “Best College DJ.” Undergrads literally came by the busloads to proudly cheer on their fellow Bruin, Trojan or Lion, and eventually Fresch was chosen by live text voting to be the victor. After the Trojans basked their victory, the crowd quickly switched focus to the star of the night.

Once the globally famous Aoki stepped behind the tables, the entire venue went bezerk.  He extensively spun for over two hours, dropping hits such as “Turbulence,” “Warp,” his remix to Kid Cudi’s “Pursuit of Happiness” and brand new songs from his Dim Mak label, keeping the frenetic crowd dancing all night long. Unlike most DJs, Aoki frequently interacts with the crowd during his sets, elevating his performances to another stratosphere.  He sprayed the front row with champagne, smashed cakes into fans’ faces and did his signature stage diving and crowd surfing. Aoki’s extreme energy was surely reflected by the crowd as people danced and fist pumped until exhaustion. It was a wild night, and it was nothing less than expected.