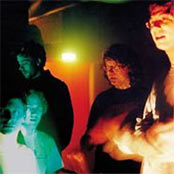 Gomez guitarist Ben Ottewell has one of the most convincing voices in current rock, a from-the-deep, raw growl that explodes out of his thin, nebbish body. It's not surprising, then, that the highlights of Gomez's stage show——the rowdy "Get Myself Arrested," the trancy electro-folk "Revolutionary Kind" ——almost always came immediately after Ottewell took in a deep breath and leaned into the mic.

But Gomez aren't a one-man show——though Ottewell is the prime vocal presence—— and the band's 90-minute set proved that they've risen above heady studio experiments into a realm of pop artistry they share with only few other current artists. Gomez may be from Britain, but their sound is distinctly American in flavor; they share an intimate, understated knowledge of the dirty roots of rock music with such distinctive peers as Wilco, Beck, and Phish. So, when Gomez's other frontman, Ian Ball, began a country-influenced, fingerpicked ballad, there was no need for spoken apology or explanation. However, as Ottewell joined in on harmonies, his howling, depressed voice expressed a perfect amount of both.