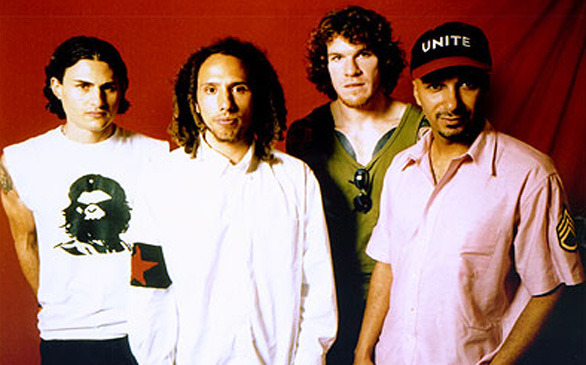 Are you reeling from the number of music festivals that have taken place recently? Do you find yourself unsure of what scene fits you, lost because you missed the epic Coachella and the indie SXSW?

Be glad that you saved your money.

Sure, eye-candy rockers the Strokes are great to see live again, and there is nothing like watching the likes of ’80s darlings Duran Duran onstage once more. Coachella might have been the three-day, 300-dollar event of the year, but the upcoming L.A. Rising is giving the much-hailed, hippie-riddled festival, and all the other recent music festivals, a legitimate run for its money.

Deadmau5 lover, Yuck follower or Kanye idolizer, you’ve probably heard of Rage Against the Machine no matter your preferred genre to bounce your head along to. There are a slew of comebacks, but nothing tops RATM and their upcoming show at July 30’s L.A. Rising. Tickets went on sale May 13 (officially), and the show will attract a crowd to fill the entire Coliseum in downtown Los Angeles. Sprinkle in Muse, Rise Against and a couple of other alternative and even jazz acts, and you’ve got yourself quite a festival.

This is not just any other rock quartet putting on a show with a few chords and catchy melodies. This is a group of men who know what they are doing. Put on any RATM track and you will automatically hear what will separate their performance from that of any other band on the recent music festival roster. Tom Morello on a guitar is pure dynamite, and the angry voice and biting lyrics of Zach de la Rocha dare you to try and just sit back and listen passively. These guys aren’t messing around.

Both politically conscious and musically bold, the band is everything any political activist and alternative music lover could possibly dream of. Even thought this isn’t the era of the civil rights movement or even of the original MTV era, once you hear RATM launch into “Renegades of Funk,” the lyrics won’t feel old and the sounds won’t feel contrived – a feat only an excellent band can achieve. This might not be the politically charged climate that spurred RATM songs, but the lyrics still represent valid struggles and you can’t deny that you’re listening to top-notch rock.

What L.A. Rising is also doing that no other festival has truly achieved is getting together a group of musicians who show the evolution of a genre, allowing the music fan to see the history of a particular sound and outlook.

Sure, the ’80s fan could enjoy oldies and also see Kanye West at Coachella, but those have nothing to do with each other in terms of a specific genre or concept. Put RATM, Muse and Rise Against together on one stage, and now we’re talking.

This is the show that will let you track the development of the angry lead singer and the group of guys looking to infuse political challenge into their lyrics. These are the bands creating enough fuzzy chords, crashing cymbals and unrestrained screaming to push your poor eardrums into a state of sheer pain.

What might seem strange are the additions of Spanish rockers El Gran Silencio and the Fugees-famed Ms. Lauryn Hill, since they might not seem like the most related artists to add. But this is where the festival keeps looking stronger: Both of these acts are obviously influence by rap and reggae, something markedly influential in the style of RATM, and their lyrics are less than shy. Each artist has got some politically charged message, and they’re not afraid to express it.

Politics aside, this is the most exciting, cohesive and well thought out festival of all the recent ones that have passed. The concert scene needs something explosive after all the ridiculously expensive, strange mash-up festivals that have passed. Lovers of alternative music in particular can’t help but rejoice.

But if you still haven’t heard tracks from the major headliners, turn on KROQ, visit iTunes and dig out your most padded outfit for the mosh pit of the decade. This is going to be one to remember.