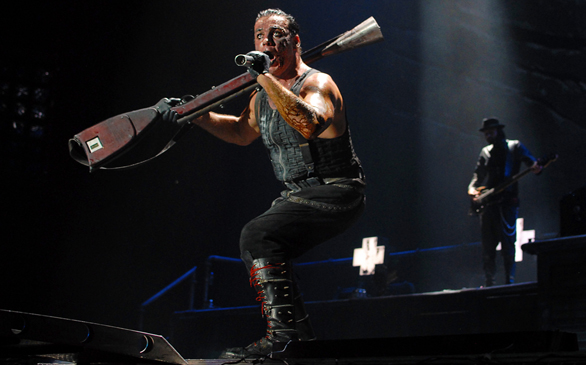 After a decade’s absence, the Berlin industrial metal group returned to Los Angeles bringing an army of firepower to the stage. Dozens of fire trucks parked outside the venue in case the Forum ignited from the pyrotechnics used throughout the show. Lead singer Till Lindemann welded his way out of a metal door as they played “Rammlied” to a thunderous ovation.

Fans repeatedly chanted to the German-based lyrics without having much idea behind their meaning. Songs “Feuer Frei!” resulted in booming chants of “Bang Bang” from the crowd.

Theatrics played a pivotal role during the night, as Lindemann launched keyboardist Flake into a bathtub while dumping sparks from a platform 30-feet in the air. Members wore their signature dragon masks expelling flames from their faces, causing a wild eruption from the crowd.

After two encores, they ended the night with “Engel,” while Lindemann appeared with metal wings that released flames from each side. They bowed in gratitude towards the L.A crowd, ending the night with “Thank you, we love you very much.”