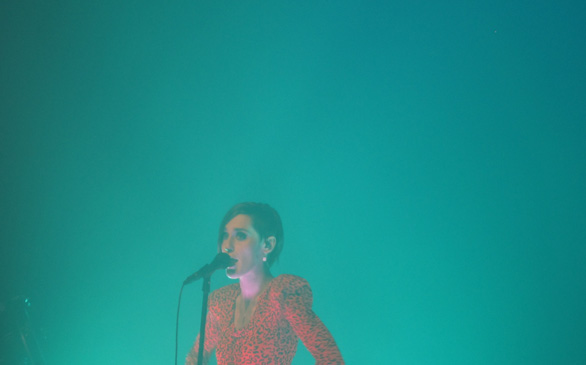 It was one of those unusually remarkable scenarios I had yet to encounter at a show. Nope, not in the long list of gigs I have witnessed had I ever come across a situation quite like this. Because in all my concert-going years, never had I been to a live music performance where the majority of those in attendance, including myself, could neither comprehend nor pronounce the lyrics that were being sung. Yet, if for some reason, you didn’t find yourself dancing uncontrollably during Yelle’s final U.S. show of its spring tour, there probably was something wrong with you.

With pop fans and dance music aficionados of all ages converging on the Music Box for their Saturday night entertainment, it didn’t take the French trio long before it brought a crowded Hollywood dance floor to life minutes after taking the stage. Vocalist Julie Budet (aka Yelle), for one, had the crowd’s attention in the palm of her hand from the start, writhing, strutting and kicking across the stage in what looked like a customized Muppets costume made of fabric scraps before shedding it for a skin-tight, leopard-print onesie. In between songs, she flirted with her fans, at one point bidding in her thick accent an invitation for us to shake our “booty-booty” to the next song.

From Budet’s cheeky stage presence to drummer GrandMarnier’s and keyboardist Tepr’s bouncy rhythms, it’s not a surprise that reviews have been positive across the board since Yelle’s debut album, Pop Up, hit stores in 2007. Now, with their second release, Safari Disco Club, out since March, Yelle is continuing to pack venues around the globe with a brand of synthpop that makes you can’t help but dance.

Sure, it felt a little weird that most of us had no idea what words were coming through Budet’s microphone and no chance of singing along with her – even though she’ll make you want to try. But with enough bass, sass and glee to fill up more than a one-hour-and-15-minute set, Yelle made it hard for us to walk out of the building without smiles plastered across our faces.