Just Go With It and More 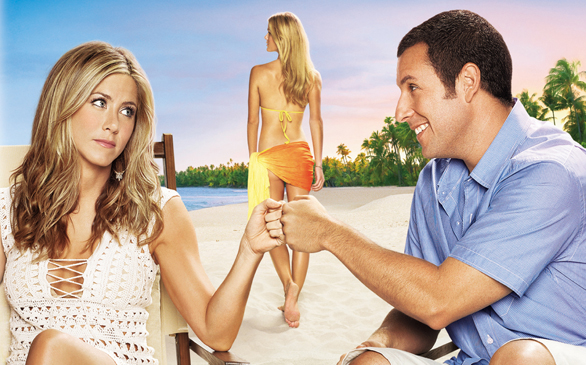 The Majors: Jennifer Aniston has to pose as the wife of her commitment-wary boss (Adam Sandler) in order to get him off the hook with his girlfriend. But the lie soon spirals out of control in the rom-com Just Go With It.

A team of underwater cave explorers become trapped in the world’s most remote cave system during a storm and are forced to dive deeper and deeper in search of an exit in Sanctum.

Under the Radar: Sam Worthington stars as an ex-convict who discovers he has assassinated the wrong person and has to quickly scramble to right his mistake in the Australian action flick Pros and Ex-Cons.

Foreign Fare: Ricardo Darín (The Secret in Their Eyes) is Sosa, an ambulance-chasing lawyer who falls for an EMT in the dark thriller Carancho.

The Vault: Now available individually, the Marx Brothers’ Universal films are among most enduring comedies ever made, including Animal Crackers, Cocoanuts, Horse Feathers, Monkey Business and, perhaps their best, Duck Soup.

George Harrison’s Handmade Films produced some of the best English films of the ’70s and ’80s. Two new collections highlight Handmade’s work starring ex-Monty Python member Michael Palin and the versatile Bob Hoskins. Palin’s collection includes the Terry Gilliam fantasy Time Bandits, the farcical post-war satire A Private Function and the light-hearted look at the life of a man of God in The Missionary. Hoskins’ collection contains the crime classics The Long Good Friday and Neil Jordan’s Mona Lisa, as well as The Lonely Passion of Judith Hearne and his directorial debut Raggedy Rawney.

It’s a star-studded life and death adventure when Night Flight (1933) debuts on DVD. Polio breaks out in Rio de Janeiro and daring pilots have to brave treacherous conditions to retrieve the vaccine. Clark Gable, Myrna Loy and John Barrymore star.

The Idiotbox: One of the best shows on TV, “Breaking Bad,” returns for Season 3. The series follows a high school chemistry teacher (Bryan Cranston) diagnosed with cancer who starts making and selling meth in order to provide for his family after he is gone.

Gear up for baseball season with two new Blu-rays. When It Was a Game: The Complete Collection is a nostalgic look back at baseball’s golden age through home movies taken by fans and players and interviews with players, sportscasters and writers. 61* is a dramatic retelling of the race between legendary Yankees Mickey Mantle and Roger Maris for the single season home run record.

John Huston brought Rudyard Kipling’s epic adventure tale The Man Who Would Be King to the screen in a rousing adaptation. Michael Caine and Sean Connery.