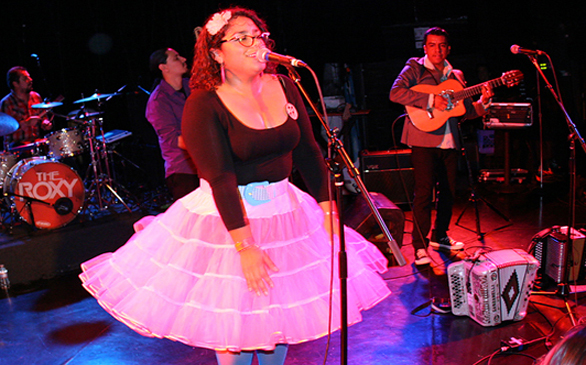 La Santa Cecilia lead singer Marisoul shines while she blissfully utters song lyrics on stage. Marisoul, who is easily reminiscent of salsa queen and legend Celia Cruz, carries a distinguished yet resplendent resonating voice. She showed that off at the Roxy; it was the group’s first time performing at the venue.

Dressed in a prominent wardrobe on the rather tiny stage, La Santa Cecilia made everyone’s night with their diverse music style. La Santa Cecilia (The Saint Cecilia) performed various songs from different music styles. One such track was “Uzumaki,” a cumbia-nortena song in Spanglish, detailing a dream. Moreover, “Chicle” (Gum) easily became a crowd favorite of the night where the headliner was Colombian group Bomba Estereo.

But without doubt, “La Negra” (The Black One) is La Santa Cecilia’s trademark track. Filled with an upbeat tempo, powerful lyrics, a full drumkit set, congas, bass and guitars and an accordion, this cumbia (a musical genre originating in Colombia) tune thrilled the packed audience.

La Santa Cecilia, composed of Gloria Estrada, Hugo Vargas, Alex Bandana, Miguel Ramirez, Jose Carlos and Marisoul have been together four years. They formulate their music and are inspired from not only their Los Angeles-based and Mexican backgrounds but the diversity of others.

In each of their performances, La Santa Cecilia shows that. And Marisoul’s diva-like voice lights up the sets.