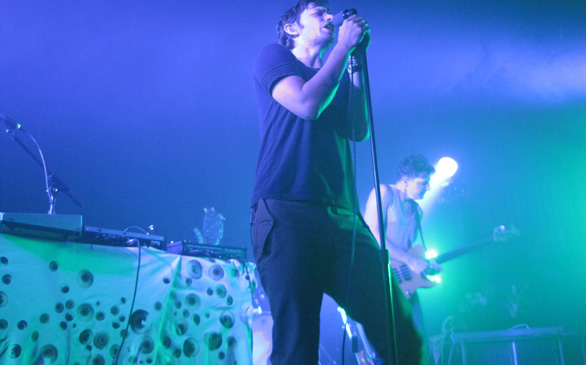 Not many bands can toy with your imagination and simultaneously inspire you to sing and dance like you’re a 5-year-old kid all over again. In a matter of four years, though, Yeasayer has struck that chord cleanly to garner rousing applause across the country from music critics and fans alike.

For any proof of that, you had to look no further than the Music Box on a Tuesday in late May. Playing the second night of two sold-out shows in Hollywood, a quintet of weirdos from Brooklyn spellbound the youthful crowd with hallucinogenic visuals, neon lights and a barrage of sounds from every planet in the solar system.

With groovy synths, tribal beats and beautifully shared harmonies meshing together that evening, Yeasayer finally gave Los Angeles what it had anxiously been waiting for since the release of their highly acclaimed second album, Odd Blood, in 2010. Early on, fans were treated to Odd Blood favorites like “O.N.E.,” “Mondegreen” and “Rome” as frontman Chris Keating, guitarist Anand Wilder and bassist Ira Wolf Tuton crooned melodies to the rhythms of drummer Jason Trammell and percussionist/keyboardist Ahmed Gallab.

Yet Yeasayer also made a point of revealing where it may be headed next, showcasing some more of its unique brand of experimental pop with new material off what will be a third LP. The crowd, nonetheless, dug it – not always an easy task for a band that hails from the same metropolis as neo-psychedelic contemporaries MGMT, Grizzly Bear and Animal Collective, a favorite of Keating and Wilder’s from their high school days in Baltimore.

Still, in a city as big as New York, Yeasayer has managed to carve out a little of its own space among the indie heavyweights. That’s, in large part, because it’s a band that doesn’t want to get bored, that wants to push boundaries and not confine itself to any one genre. It’s a band that wants to experiment with an endless list of sounds and discover new avenues to travel down. It’s a band that asks you to channel your inner-childlike tendencies and embrace the unknown while they’re manning the stage.

And because of that, Yeasayer is not a band for everyone. But for what was a short, yet sweet one hour and 15 minutes, a room full of people got to revel in those emotions again for the first time in quite a while.