Asobi Seksu: May 28 @ The Satellite 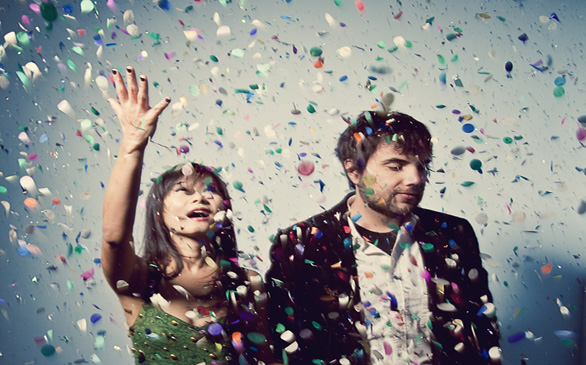 Head-banging keyboard renditions while playing in a band named Asobi Seksu (Japanese slang for “casual sex”) may not exactly be what extremely caring yet sometimes overbearing Asian parents have in mind when they religiously mandate early childhood music lessons upon their spawn. Yuki Chikudate of the band formerly known as “Sportfuck” may very well agree.

Towards the end of their set, she tells the crowd, “My mom was here today with a platter of sushi. She said, ‘OK, bye. I don’t want to hear you guys today. You guys are too loud.’”

And loud they were. New York band Asobi Seksu brought some of their city’s energy back to Silver Lake, as they performed their dream pop music to a crowd of cheering fans. With Larry Gorman on drums, Billy Pavone on bass and James Hanna on guitar, the cute-as-a-button lead singer and keyboard player belted out lyrics in both English and Japanese while whipping her hair back and forth. Chikudate’s beautifully girly voice complemented the noisy, yet pleasantly jarring sounds of the instruments.

Even though the majority of the crowd were not of Japanese descent and thereby couldn’t sing along with the vocalist even if they wanted to, the band’s audience was nonetheless roused by their performance of older tracks like “I’m Happy But You Don’t Like Me” and new songs from their new album, Fluorescence. This lush conglomeration was so stirring that you didn’t mind not being able to tell which language the petite frontwoman was singing.

Garish and nostalgic, hazy and blaring, Asobi Seksu creates sounds that will have you wanting to dance violently and sway harmoniously within a short span of time. Listening to their albums through your headphones is definitely a pleasurable experience, but hearing it live in all its in-your-face glory brings Asobi Seksu’s music to a whole other level.