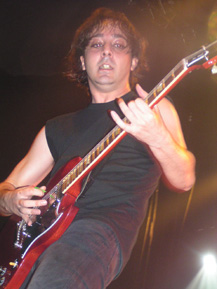 "Blast Off! It’s party time, and we all live in a fascist nation. Blast off! It’s party time, and where the fuck are you?" sang System’s Serj Tankian, opening the night with "B.Y.O.B." from their recently released album Mezmerize. And the answer to his question? They, the band’s devoted fans, were all at the Long Beach Arena, shouting and throwing fists in the air for local favorites System of a Down (SOAD).

Daron Malakian – songwriter, guitarist and vocalist – was surely raising his guitar to old-school fans from his hometown of Glendale, Calif., who have stayed loyal to the band from its early ’95 beginnings. Throughout the night, Malakian spun and head-banged as his eyes stared crazily out into the audience, while Tankian sang as if serenading the heavens.

SOAD played an arsenal of hits from their self-titled System of a Down, Toxicity, Steal This Album! and Mezmerize.

Highlights of the night included the fast-paced "my cock is much bigger than yours" lyrics of "Cigaro," along with "Chop Suey!" the song that blends punk, metal, rock ballad and a musical dose of everything else. The tidal wave of SOAD’s live set inspired a cyclone of mosh pits, which resembled a sea of psychotic pinwheels across the venue’s floor. John Dolmayan slammed on the drums during "Aerials" as bassist Shavo Odadjian jumped on top of the speakers, his braided beard flying around from the tip of his chin.

SOAD closed the night with "Sugar," the song that helped put them on the rock map. With Armenian flags held high, System of a Down put on a hell of a show, proving that originality in music can still thrive while selling millions of records. Kudos to a band that continues to bring it live, and appears to have a never-ending string of songs still lurking within the creative yet sarcastically twisted minds of its members.

Openers the Mars Volta kicked off the show with their brand of avant-garde jam music that continues to confuse and mystify fans. Although guitarist extraordinaire Omar Rodriguez-Lopez played with his back to the audience for much of the show, singer Cedric Bixler-Zavala seemed to make up for it by bouncing around the stage as he sang songs off of Frances the Mute and De-loused in the Comatorium. Though hard to compare with the adrenaline-pounding SOAD set, the Mars Volta impressed with the lengthy "Cygnus … Vismund Cygnus: Sarcophagi and Umbilical Syllables."