The Adjustment Bureau, The Eagle and More 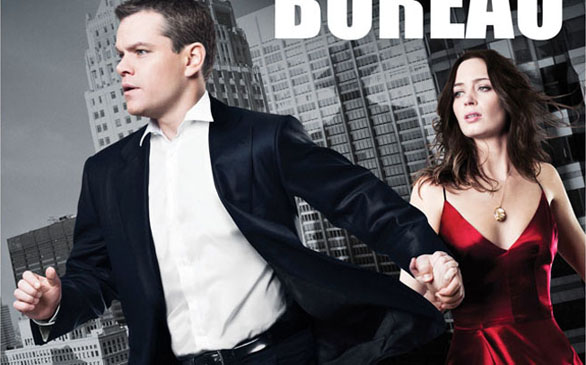 The Majors: Matt Damon and Emily Blunt have effortless chemistry in The Adjustment Bureau. Based on a story by Philip K. Dick, this romantic supernatural thriller has a great deal more heart than most of the sci-fi legend’s typical mindbenders.

Ed Helms (The Hangover) gets his first starring role in Cedar Rapids, a comedy about a man-child insurance agent who, with the help of a flirty married woman (Anne Heche) and a boorish boozehound (John C. Reilly), comes of middle age during an industry conference.

Channing Tatum stars as a Roman soldier venturing out into the perilous, farthest reaches of the empire to clear his father’s name in The Eagle. Jamie Bell and Donald Sutherland co-star.

Liam Neeson continues the weirdest career transformation since Orson Welles started hocking frozen peas with the Hitchockian thriller Unknown. After a car accident, Neeson wakes to find that his wife (January Jones) doesn’t recognize him, another man claims to be him and somebody wants him dead.

When They Were Young takes you behind the scenes of the rise of some the NBA’s greatest stars, from Shaq and Kobe to LeBron James, using high school home videos and draft-day footage.

The Idiotbox: One of the best comics working today, Louis C.K. turns auteur with his latest series, Louie: Season One, a darkly funny, sometimes painful look at the life of a divorced, middle-aged father of two who tells jokes for a living.

From the Vault: After making a splash with his Barbie doll short Superstar, Todd Haynes (“Mildred Pierce”) exploded onto the indie film scene with his debut feature Poison. Haynes throws together three tales of sexual transgression, inspired by the work of Jean Genet and told in varying styles for a delirious and original mix. The 20th Anniversary Edition comes re-mastered and loaded with extras.

Under the Radar: Josh Radnor (“How I Met Your Mother”) makes his writing/directing debut with Happythankyoumoreplease, a dramedy about a group of 20-somethings trying to find themselves. Radnor stars as an aspiring novelist who takes a stranded orphan under his wing while trying to get his life in order.

Blu Notes: Two western classics come to Blu-ray: Vera Cruz stars screen legends Burt Lancaster and Gary Cooper as two Old West mercenaries who travel to Mexico during the revolution to make some money and find themselves in the midst of a revolution. The great Robert Aldrich (The Dirty Dozen) directs. Walter Hill directed The Long Riders, an action-packed telling of Jesse James’s rise from folk hero to public enemy number one, casting four sets of real life brothers, including the Quaids and Carradines.

Martin Scorsese brought his versatility and love for classic movie genres to bear in New York, New York. Liza Minnelli and Robert De Niro star as a singer and saxophonist who join up in the swinging big band era.

Cult favorite The Boondock Saints comes to hi-def in a 10th Anniversary Edition with commentary tracks, two cuts of the film and a brand new retrospective featurette.

Jackie Chan stars as a Hong Kong detective brought back to life and granted powers by a magical amulet to save the world from the evil Snakehead in The Medallion.