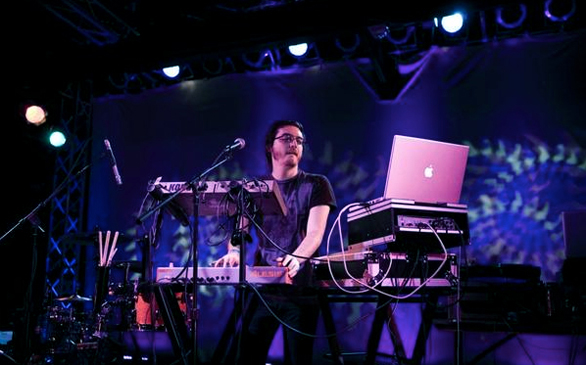 The small but enthusiastic crowd wasn’t quite sure what to make of Short Circuit’s 40-minute set. Bleeps, bloops and Auto-tuned vocals barraged the senses with a decidedly foreign sense of “who the hell is this guy.”

The beauty was that no one had really quite seen anything like it. Short Circuit was talented and between the mixing, keyboard shenanigans and aforementioned Auto-tuned vocals, our ears got quite a workout. Somehow it all formed a cohesive style that was largely original and fresh sounding.

The live, performance-based set was largely devoid of any simple set-it and forget-it DJ tricks. Everything was done in real time, a seemingly rare occurrence with today’s modern live electronic music.

Short Circuit’s style oozed European style from his clothes to his samples, but this man is a proud product of Los Angeles. He released his first EP Late Night Drive on L.A.-based label Binary, and I have no doubts that we’ll be seeing a lot of him in the coming future.