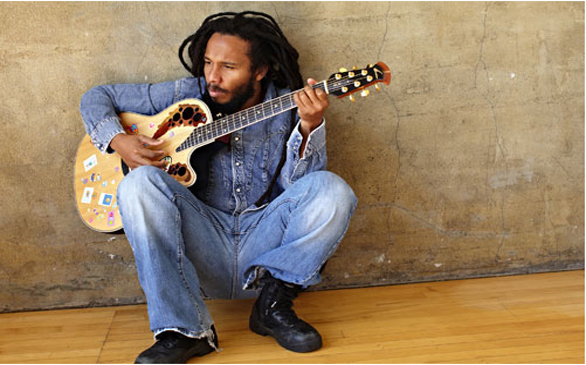 Private live music shows tend to be very different than a normal concert. Such are deeply intimate, passionate and vividly remembered for the small audience and the personal touch the performing artist adds to the venue.

Just that can be stated about Ziggy Marley’s new album release party at the Hotel Café in Hollywood. Marley’s record, titled Wild and Free, is now available.

Accompanied by a full band that included musicians with a bass, guitar, full drum set, organ, percussion and a magnificent female voice in his back-up singer, Marley delivered various tracks off the CD. Starting off with the upbeat “Wild and Free,” which originally features Woody Harrelson, Marley began with a potential future true hit. “I see hemp fields forever glowing wild and free,” he sings with a voice reminiscent of father, Bob Marley.

This humble individual, who has dreadlocks of nearly four-feet in length, continued with his reggae tunes called “Changes,” “Personal Revolution” and “Mmmm Mmmm.” But perhaps Marley’s most prominent songs come via “Road Less Traveled” and “Reggae In My Head.”

“Road Less Traveled” begins with a mellow tone, but it quickly turns into a danceable song. On the other hand, “Reggae In My Head” seems like an adventure, and it could be implied Marley’s mother is mentioned as he sings “sitting by the river listening to her songs. She played it all night long. She brought me from defeat hypnotized by the beat.” It could also be an older sister or a significant other. Heck, it could be as simple as the radio as well.

Uplifting and reggae-pure, Marley’s show was also a representation of what his father did when alive and performing. Marley, whose birth name is David Nesta, writes, sings and performs directly from the heart, personal experiences and what he believes is a message to depict via music to the world. This show was inspirational from all probable perspectives of music.