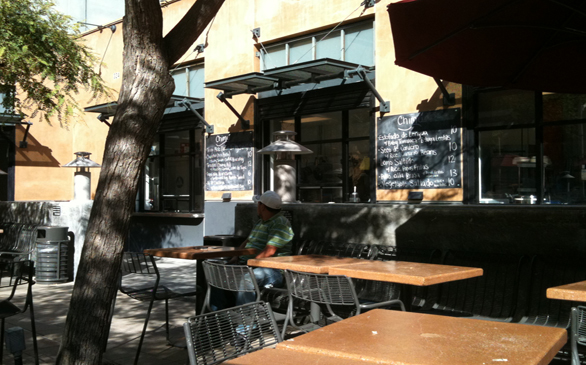 Downtown’s Grand Central Market is a historic landmark that normally houses vendors that sells fresh meat, baked goods – and extremely ripe produce – as well as food-court type stands where you can get a plate full of sloppy hot food for just a couple of dollars. The newest and most gourmet addition to Grand Central Market is Chimú (named after the culture of people who reside on the northern coast of Peru). Partners Mario Alberto Orellana (Lazy Ox Canteen, Mo-Chica) and Jason Michaud (Local) have teamed up to present a casual walk-up window-style restaurant that serves Peruvian “Soul Food.”

With fare that is very similar to Mo-Chica near the USC Campus, Chimú has a small menu that serves fish, chicken, beef, pork, lamb and few vegetarian options. They also have a concoction they called barley water, which is brewed more like a tea and consists of barley, flax seeds, ginger, mint and a variety of other plants that (when served on ice) makes for a refreshing accompaniment to your meal – especially on a warm day, as seating is mostly outdoors. The taste is slightly sweet and tea-like in taste and color, but the ginger and mint really stand out in the mix of flavors.

The menu seems to change based on what is fresh, as it is written in chalk. There was an attempt to order the Tiradito, which is basically a ceviche that came with quinoa and peaches, but due to the weekend, it was not fresh enough for them, so they could not serve it. Quality.

Today’s meal consisted of the Lomo Saltado and Seco de Cordero. The Lomo Saltado was a classic Peruvian dish that contains thick cubes of tender, marinated beef mixed with wedged slices of red onion and tomatoes, atop a bed of crispy French fries. The Seco de Cordero was a chunk of exquisitely tender lamb, sitting on white beans with a thick brown gravy, garnished with thinly sliced red onions. It was almost too pretty to eat.

Both dishes came with sticky white rice with huge kernels of Peruvian corn, almost hominy-like in size. Two sauces also came with the meal: a creamy, yellow sauce made with feta cheese and a green, herby sauce made with peppers. The sauces went well with the Lomo Saltado, as it paired nicely with the fries and rice. The lamb, however, was already so well sauced with gravy, that no extra seasoning and flavoring was needed.

The friendly staff allowed us to sample part of a dessert they will soon put on their menu. It was a creamy, caramel-like filling with a hint of cinnamon that was sandwiched between two homemade shortbread cookies. It seemed to be a perfect little ending to a wonderfully flavorful meal.

Everything came in a biodegradable take-out container, and the silverware and drink cups were also compostable. All of this Peruvian goodness came at quite a deal. Entrees ranged from $10-$14, with vegetarian and salad options starting at $6. In comparison to the food vendors inside the market, this was slightly more expensive, but for the price, you get a higher caliber of ingredients and excellent customer service.

Since this whole establishment is brand new, they have plans of adding a brunch menu on the weekends, as well as dessert. The only downside to this place is that it has to close the same time that Grand Central Market closes, which is at 6 p.m. daily. Hopefully, that will change, as it is not physically inside the market but outside facing Angel’s Flight on Hill Street.

Chimú is located in a convenient location, just steps from the 4th Street/Pershing Red Line Metro stop, and for driving folks, there is one-hour validated parking in the market garage.

Budget
The ECOLunchbox is an eco-friendly food storage solution for people on the go
2,025 views

Budget
Mexicali Taco & Co.: Everything But the Tacos
4,338 views

Budget
Tom Bergin's: "Where Everybody Knows Your Name"
2,670 views