Hobo With A Shotgun and More 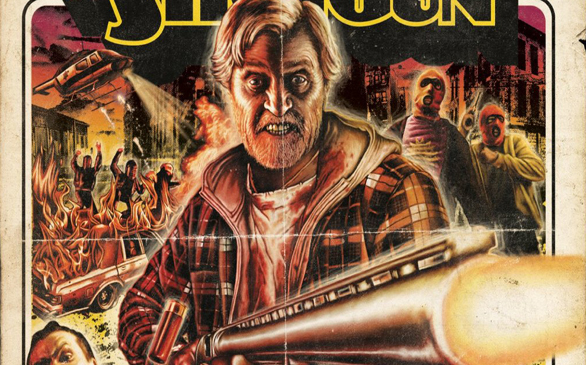 Foreign Fare: Prolific Japanese genre auteur Takashi Miike knocks it out of the park with his samurai adventure 13 Assassins. A group of deadly warriors takes on a suicidal mission for honor. A slow build climaxes in an explosive burst of bloody action.

The Idiotbox: Colin Ferguson is the sheriff of a small town populated entirely by geniuses who are kept isolated from the world while they build inventions for the government in “Eureka.” Season 4.0 has a group of the residents traveling back in time to the town’s founding, only to return to an alternate present. Also included is a crossover episode with “Warehouse 13.”

A righteous cop (David Lyons, “ER”) framed for murder goes underground and reinvents himself as a superhero in The Cape: Complete Series. Keith David is the leader of a group of carnies who endows Lyons with a super-powered cape in which to seek justice. Summer Glau and Vinnie Jones co-star.

Adult Swim’s Delocated!: The Complete Seasons One & Two (available Oct. 25) takes on reality TV when a family in the Witness Protection Program gets its own show, moves to New York and has to wear ski masks to protect them from the Russian mob. A fine cast of comedians including Jon Glaser and Eugene Mirman make this show hilariously absurd.

Joe Flanigan (“Stargate: Atlantis”) leads a team accidentally transported to an alternate dimension where they must fight to survive in the Syfy movie Ferocious Planet.

Funny Business: Before winning a Tony Award and before “South Park,” Trey Parker made his directorial debut with the cult Troma film Cannibal! The Musical, now available in a two-disc 13th Anniversary Edition, which features new interviews with Parker and creative partner Matt Stone, a new cast commentary track (along with the beloved inebriated original) and deleted scenes.

The Horror! The Horror! Hobo With A Shotgun, based on one of the fake trailers from Grindhouse, certainly brings the exploitation goods. Rutger Hauer plays a homeless man fed up with the urban decay and corruption all around him who decides to clean up the city himself with his trusty 20-guage.

Legendary horror studio Hammer Films returns with Wake Wood, an atmospheric supernatural tale about a grief-stricken mother and father who move to a small Irish village after the death of their daughter and enter into a pact with the pagan community to bring her back to life for three days.

Half-vampire, half-human Rayne takes her vampire slaying to WWII Europe where she must stop an army of undead Nazis before they can reach Berlin and grant Hitler immortality in Bloodrayne: The Third Reich.

One of the great cinematic thrillers, John Frankenheimer’s masterpiece The Manchurian Candidate comes to hi-def. Frank Sinatra stars as a Korean War vet who begins to uncover clues revealing him to be apart of a brainwashing political conspiracy. Angela Lansbury was nominated for her role. Frankenheimer provides a commentary track, along with an interview with Sinatra.

Das Boot: The 2-Disc Collector’s Set restores Wolfgang Petersen’s intensely claustrophobic look at life inside a German U-Boat to its original German miniseries length of 282 minutes, cutting it together as one film. This masterpiece of frayed nerves comes loaded with behind the scenes material.