Veterans and Rookies: Going Down the Roster 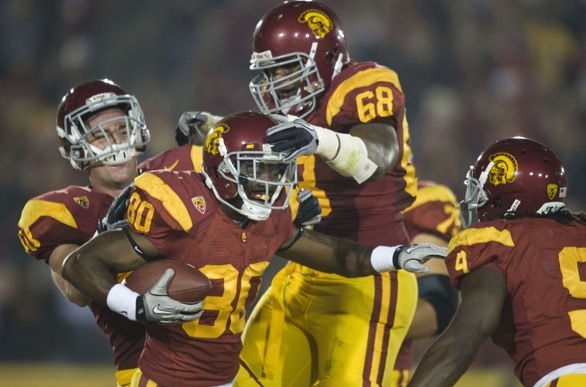 Veterans like wide receiver Brandon Carswell will be looked upon for experience and leadership.
(Credit: Kevin Sullivan/Orange County Register/MCT))

Before the players head into the locker room for the summer and fans see the newly improved Trojans this upcoming season, taking a sneak peak at what’s to come can’t hurt. But going down the roster, out of all the seniors, there are five that must step up big.

The rookies coming in have plenty of competition on the field that will surely create healthy rivalries for starting spots. Although the Trojans won’t be able to compete for a championship this season, that’s not stopping them from wanting to be the No. 1 seed.

The big talk of the summer has been wide receiver George Farmer. This five-star recruit ran his 40-yard dash in an impressive 4.4 seconds. Farmer is a 6-foot-2, 205-pound player with impeccable speed, whose talent is set to go nicely with Robert Woods’ and Kyle Prater’s.

With most of the Trojans’ offensive line graduating last year, QB Matt Barkley needs as much protection as he can get. His bodyguard for the season might be Cyrus Hobbi from Saguaro High (Arizona), who’s ranked fourth highest offensive lineman, by Rivals.com.

When the passing game is off, the Trojans can call on Amir Carlisle from Sunnyvale, Calif. He has dominated the running back position scoring 28 touchdowns and rushing for 2,110 yards. His ability to run over players to get to the finish line is just what the Trojans need.

As talented as these rookies are and can become … they’re still rookies, and they’ll make mistakes. As for seniors Brandon Carswell, Marc Tyler, Rhett Ellison, Christian Tupou and Chris Galippo, they must be flawless.

Carswell is the only senior wide receiver on scholarship; his smarts and confidence will be counted on greatly. Although he only has had three career starts, he has 22 receptions for 233 yards and one touchdown. Carswell’s true value comes from his ability to block in the passing and running game. With a young offensive line, his confidence to hold his own on the field will complement USC’s offense.

Tyler seems to be the player everyone loves to hate, and it seems all eyes have been on him since he climbed from the bottom to the top of the depth chart last season. Despite off-the-field issues, Tyler has proved himself on the field. He led the team in rushing with 913 yards and racked in 10 touchdowns. He is the only power running back on the Trojan’s roster and will be depended on by the team for goal-line situations and short yardage runs. His strong upper body build is exactly what’s needed to get the ball up the middle.

Ellison is a top player whom head coach Lane Kiffin said looked “NFL-ready.” He is considered one of the hardest working tight ends and players on the team. He is a versatile player who can block and even play fullback. His presence on the field alone inspires his teammates to play their hearts out. His 19 career starts, 338 yards and four touchdowns don’t do justice to the talent this player has. The effort he has given his team since his arrival must be shown one more time.

Moving on to the other side of the ball, defensive tackle Tupou is hungry to show out this season, since he tore ligaments in his left knee during the 2010 spring game. Tupou is the type of player no one wants to face; he has 37 tackles, seven for a loss and a sack. Since former Trojan Jurrell Casey left to the NFL, Tupou’s experience, leadership and talent will be much needed.

Lastly, maybe the biggest player that will need to leave his mark is Galippo. This middle line backer is crucial in the Trojans success. He has brought in 119 tackles, 12 for a loss, two sacks and five interceptions. His explosiveness and unpredictability makes him a high threat for any team. Although he is not the fastest player his smarts and attention to detail make him a significant asset on defense.

Once these players leave, USC will have a roster dominated by underclassmen that hold the key to the Trojans future. Their talent can always improve, but as for this season these five veterans will be looked upon for their leadership and experience.