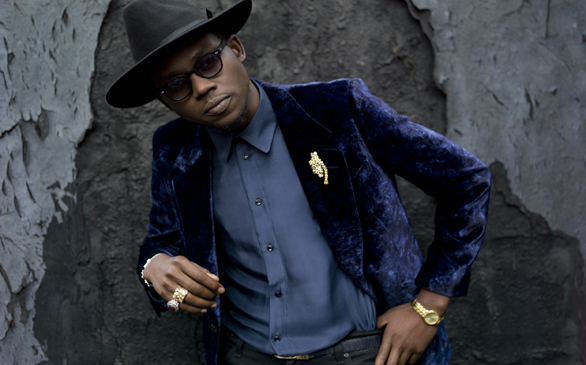 Theophilus London’s sequined gold tank top wouldn’t be most artists’ first choice for a live performance at the famed Troubadour. But this was hardly a traditional Monday night.

July 19 marked the release of London’s first full-length album, Timez Are Weird These Days, and what better way to ring in the release than with a sold-out, balls-out performance at one of Los Angeles’ most iconic clubs. The Brooklyn-based artist has been featured on “Letterman” and “Conan,” and after numerous mix tapes, a full-length, major label debut seems much overdue.

His striking style is only one part to the Theophilus aesthetic. He’s been featured in various style-based magazines including Complex, and one needs look no further than the album’s cover to see why it’s been a point of interest. The second part is his sparkling, highly unorthodox samples and beats. Needless to say it’s a wildly refreshing sound and style that goes a long way to feeling fresh.

London started off with tracks from his latest album including “Last Name London” and his latest single “I Stand Alone.” The surprisingly seasoned crowd was treated to a variety of tracks off his previous mix tapes including “Humdrum Town,” “Girls Girls $” and “Flying Overseas.” His style is hard to pin down but is equal parts laid back hip-hop, nostalgic electro and old school Motown sing-a-longs.

It’s an altogether charming mixture; an all-encompassing blend that is perfect for a laid back summer day or, apparently, a surprisingly energetic performance at a famed L.A. rock venue. Fans were able to get photographs and signed autographed copies of his new full length after the show.

Rest assured, Angelenos, you’ll be hearing a lot about this hip, stylish and altogether highly put together artist in the years to follow.