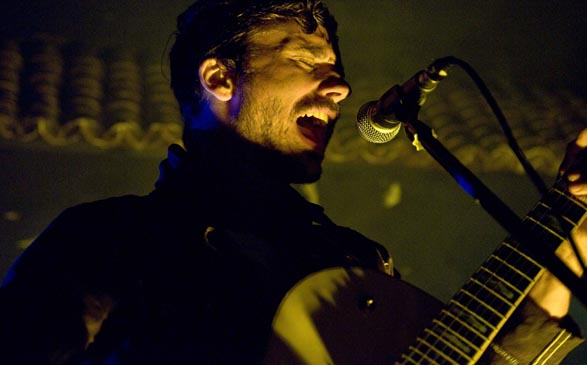 A line down the block and a packed staircase greeted me as I walked up to El Cid to see Portugal. The Man. The band, recently introduced to me by a good friend and fellow photographer, was a joy to finally see live. When the doors opened and the fans packed themselves into the venue, the excitement spread.

For such an intimate venue, it felt like a stadium show. With energy from the beginning and a mini light show, the band took to the stage. The fans in the audience were clearly loyal, some waving new vinyl copies of the band’s latest, In the Mountain In the Cloud (released that same day), and all excited for the show to start.

Portugal. The Man – made up of Jason Sechrist on drums, John Gourley lead vocals, Ryan Neighbors playing a range on keyboards, synthesizers and backing vocals on and Zachary Carothers on bass guitar and backing vocals – are coming off their appearance at Bonnaroo and will continue touring this summer. While it seemed that every person in the venue was already loyal, anyone that was just introduced to the band, surely became a new fan.