Kings of Leon Singer Leaves Stage During Concert: Texas Heat Too Much 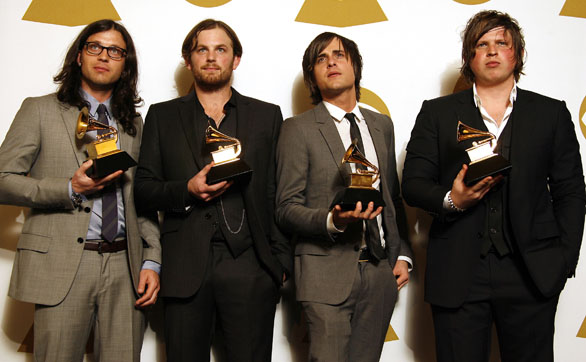 Kings of Leon, pictured here at the 2010 Grammys, ended a concert after lead singer Caleb Followill
(Credit: Lawrence K. Ho/Los Angeles Times/MCT)
The heat in Texas was apparently too much for Kings of Leon lead singer Caleb Followill. Friday night the band performed in Dallas at the Gexa Energy Pavilion on a night where the heat was in the '90s. Followill addressed the crowd, saying his "voice is 100-percent wrong" and that he was going to "vomit, I'm gonna drink a beer and I'm gonna come back out here and I'm gonna play three more songs." Followill, however, did not return to the stage. Guitarist Jared Followill apologized to the crowd both at the show and later on Twitter. The show is scheduled to take place again soon and the band is expected to play tonight in Houston.