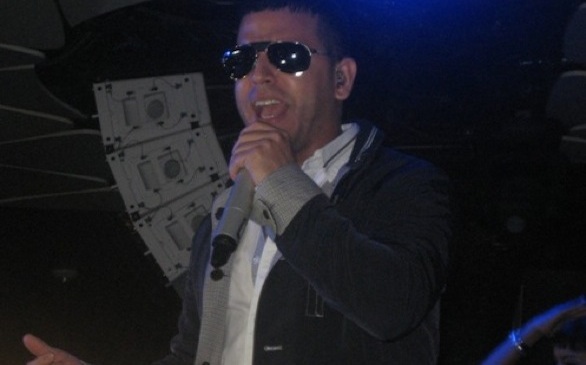 Reggaeton singer Tito "El Bambino."
(Credit: Marvin Vasquez)
I truly did not know what to expect from attending a live reggaeton concert at L.A. Live’s the Conga Room in Downtown, but it turned out to be a great night of music.

The charismatic and talented Puerto Rican singer Tito “El Bambino” came out styling, dressed with fitted blue jeans, a white button dress shirt, a dark grey sports coat, dark blue Louis Vuitton shoes and sunglasses, the signature piece of a true reggaeton ambassador. From the beginning of this much awaited show, he did not disappoint.

As a starter, Tito performed his “Cama Huele A Ti” (My Bed Smells Like You), an upbeat romantic track that features duo Zion y Lennox. Although the duo was not present, Tito captivated the audience with his smooth tone of voice. “Pepe,” which is extremely favored in Central America, was another popular song on the night.

Tito continued to showcase tunes from his albums Top of the Line, It’s My Time, El Patron and El Patron: Invencible. Some of the songs featured included “El Tra” (Do Work), “Caile” (Let’s Get It On), “El Amor” (Love) and “Llueve el Amor” (Raining Love).

To seal the night at this marvelous and intimate venue, this 29-yeard-old phenomenon delivered with “Flow Natural” (Natural Flow) that pays tribute to the Jamaica reggae genre.