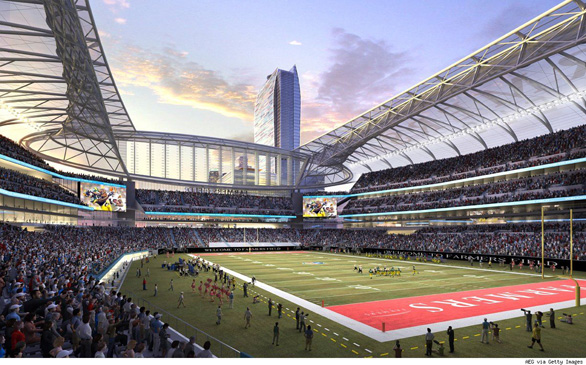 Plans for a football stadium in L.A. Live are in the works.

Los Angeles, Calif. is known for being the entertainment capital of the world, home to the beloved L.A. Lakers and L.A. Dodgers. Fashion, glamour and celebrities – it seems the city has it all except a professional football team.

Sure we have the crosstown rivalry between the UCLA Bruins and USC Trojans, but college athletics can only go so far. Especially when USC has a bowl ban for another season, and UCLA … well the closest they get to bowl games is playing at the Rose Bowl. Regardless, the blueprints are in and a possible NFL stadium could be in the works next to the Staples Center, and just down the street from the L.A. Coliseum.

The USC Trojans are the closest thing to a professional football team Los Angeles has come to since the Rams left to St. Louis and the Raiders left to Oakland. Talks have been becoming actions as Los Angeles is taking the necessary steps to bring a team here. But how will USC compete when the pros come to town?

“I think USC football would be bigger than the pro team for awhile,” says Davon Fisher a longtime USC fan, “but eventually the pro team would take over So-Cal … a pro team in L.A. has been missing for years, USC being the next closest thing to it.”

The L.A. Coliseum is an iconic landmark that is now home to the USC Trojans. But before they took over, it was home to a different team. The Rams became the first NFL team to move to the West Coast. They played their first game at the coliseum on Sept. 29, 1946 against the Philadelphia Eagles.

The Trojans have thus taken that position; in July 2007 through June 2008, USC’s athletics budget came in at just over $76 million. Football contributed over $28 million in revenue. Since then ticket sales have gone through the roof as USC continued to be a factory for producing NFL stars.

In this past year alone nine players were selected in the NFL draft. USC offensive tackle Tyron Smith became the 75th USC player to be drafted in the first round. USC set the record for the most players drafted by a school in 2011, and for all time players drafted overall.

Now that the NFL lockout is over talks have once again emerged about the Minnesota Vikings, San Diego Chargers and Carolina Panthers possibly making a new home in Los Angeles. Regardless of what team lands here, it seems USC students aren’t worried about the competition.

“I don’t think [an NFL team] would affect USC football at all. USC has done more for this city than any NFL team ever will,” says Guido Jimenez, a USC band member alumni. “The love will remain and people will continue to go [to USC games]. If anything, USC will help the NFL in L.A.”

One thing that USC fans can look forward to if a team comes to Los Angeles is seeing their favorite USC players play pro and stay close to home. Having that USC-NFL connection will only bring more support and bigger fan bases for the team.

“If Mark Sanchez had gone to an L.A. NFL franchise, tickets would have sold fast,” says Jimenez. “Seeing our favorite superstars grow [would make the NFL] even more popular in our town, [Sanchez would’ve been] a sort of homegrown player.”

Another plus to this is that once sanctions are over and probation is a thing of the past, USC and the NFL could network with each other to become a dynamic duo powerhouse. These two franchises could potentially run L.A. athletics, and even the coliseum can serve for both causes.

“I think it would be benefiting to the people who live here to share the coliseum. Also the days that games are played can be alternated so the field can be prepped with the teams logo,” says Frankie Telfort, a USC football student coach. “Also both teams could collaborate in helping out the community in the underprivileged areas in L.A.”

But take a breather, these are longterm plans and goals that won’t be reality for another year or so. So for now USC students and fans can bask in the cardinal red and gold glory that is USC football.

Have a student group or idea for a future Trojan SideLines article? E-mail editor.chief@campuscircle.net.