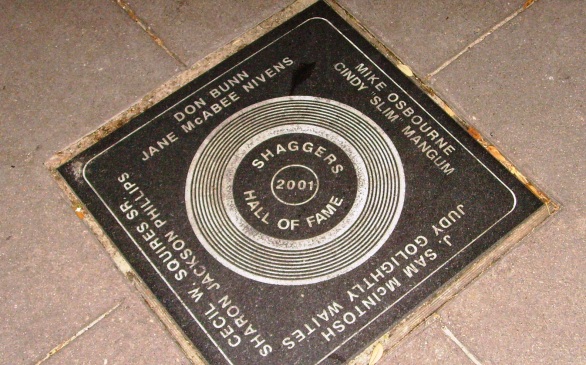 So you think you’re pretty good at shagging, do you? So good, maybe, that you belong in the Shagger’s Hall of Fame? You probably even think that your name should be etched onto a commemorative plaque and embedded in the sidewalk somewhere along the Shagger’s Walk of Fame. Wow, you must really be a good dancer!

The shag, also known as the Carolina shag, is a dance mostly peculiar to the beach communities of the Carolinas that is thought to have originated in or near Myrtle Beach, S.C., and that’s where you want to go to show off your moves. Places like Fat Harold’s Beach Club and Duck’s Beach Club, both in North Myrtle Beach, are shagging hotspots where dancers burn up the floor to DJ’d cuts or live music played by local favorites like the Carolina Breakers. These are great places to learn the dance too; sometimes there’s a competition going on for the experts, but otherwise shag dancers are very friendly and willing to show you the steps, and if you can dance to popular oldies like Rod Stewart’s “Hot Legs” and “My Girl” by the Temptations or R&B numbers like B.B. King’s “Lucille” or “Don’t Mess With My Man” by Irma Thomas then you should be able to pick up the shag with just a little practice.

The dance is not a fad – it’s been around for decades – and there really is a Shagger’s Hall of Fame. Dance contest memorabilia and awards and trophies are a big part of beach club décor in North Myrtle, and between Duck’s and Fat Harold’s, which are right across the street from one another, is where you’ll find the Shagger’s Walk of Fame. Remember not to shag all night; you’ll need to save some energy for the rest of the fun in Myrtle Beach!

Most of the attractions in Myrtle Beach are along or just off of “The Grand Strand,” a lengthy stretch of road that runs parallel to the beach. Myrtle is famous for its long-long-long beach and you’ll have no problem finding a place to play in the sand and take a dip in the Atlantic.

All of the beach activities you can imagine await here as well as some things you wouldn’t expect, like the Sun Cruz Aquasino. The Aquasino is a casino-at-sea that sails twice a day (only once on Monday) from the Little River Waterfront, offering passengers a chance to try their hands at blackjack, craps, roulette, slot machines and more. All cruises are five hours, and if you take the morning sailing you’ll get to see some great scenery while you try to pad your wallet. This is an inexpensive activity for the budget-minded too as the cruise only costs $20.

Myrtle Beach is also known for evening entertainment, and one of the most popular shows is Le Grand Cirque’s “Adrenaline;” a dazzling Cirque du Soleil-style show full of stunts and acrobatics performed by colorfully-costumed characters. “Adrenaline” takes place at the Palace Theatre where they also have song-and-dance shows like Hooray for Hollywood and The Magical Spirit of Ireland. The Carolina Opry is another large theater that puts on tons of shows including the rock music showcase the Good Vibrations Show. For a campy good time check out Pirates Voyage, a brand new show featuring a “buccaneer battle” that just opened in June (and is owned by Dolly Parton) or the Medieval Times dinner and tournament show where armor-clad knights do battle on horseback.

Ripley’s Aquarium is another Myrtle Beach favorite and rightfully so; the sights you can see (like 12-foot sharks) while walking through the aquarium’s acrylic tunnel where you’re actually inside the fish tank are breathtaking. Ripley’s has plenty of hands-on fun too; if you’ve ever wanted to pet a stingray this is the place to do it.

Lastly, there’s one more thing that’s a Myrtle Beach tradition, and it’s pretty much guaranteed that you’re going to like it. I’m talking about the Giant Crab restaurant, the legendary all-you-care-to-eat buffet joint where they always have at least 170 items ready to munch. It’s easy to get carried away at the Giant Crab but try and pace yourself, especially if you have an evening of shagging planned afterwards.