The Man Behind the Facemask: No. 16 Anthony Brown 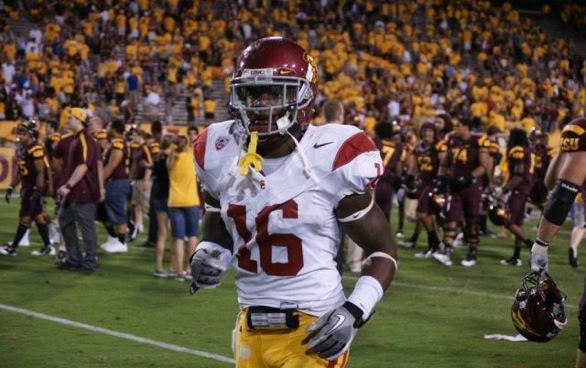 “The Man Behind the Facemask” is a series of features dedicated to the USC Trojans whom you love to watch on the field. Two weeks ago, you got to know wide receiver Robert Woods, but now we’re switching over to defense and spotlighting corner back Anthony Brown who got his first playing time as a Trojan versus Syracuse on Sept. 17 after redshirting last season.

Brown, or “AB,” says his nickname stands for not only his initials but for “Absolute Beast,” a moniker that he claims he has no choice but to live up to. Thousands of fans anxiously waited for kickoff against the team that USC hadn’t played in 21 years. To Brown, it was an experience he will never forget.

“It felt like a dream. It was a crazy feeling because I was getting my chance in the Coliseum on the big stage,” Brown says. “It was fun to be out there, I was able to make plays … I was blessed to play in [this game] I got to give thanks to God.”

Head Coach Lane Kiffin took a chance on Brown, and although it was his first game starting, Brown approached it like any other game. As a pre-game calmer Brown listens to “Never Would Have Made It” by Marvin Sapp. He says it’s a song that speaks to him and relates to him knowing that by putting your faith in God you know everything will be all right. And with that on his mind, he took the field.

But even as thousands of fans in the Coliseum and at home were watching him play, there was only one person Brown cared for who was at the game: his 1-year-old son, Anthony Brown Jr.

“Everything I’m doing is for him. Every time I don’t want to do something I think about him and then I go do it,” Brown says. “I was 19 when I had him, and I had to grow up and be a father.” Now 21, Brown states that balancing being a college student, athlete and a father has taught him a lot about responsibility. Although home is in Rialto, Calif., only 45 minutes away from USC, it’s hard to be away from his son.

“It’s hard, but I have pictures on my phone and computer. He comes to my games, he knows what daddy does … to be honest I’m playing this sport for him,” Brown says.

Brown is majoring in Communications at Annenberg School of Communication and Journalism. He plans to graduate with his degree from USC as well as go into the NFL.

“I want to go to the league. That has been my dream ever since I was a kid, and I’m only one step away from it,” Brown says. “[Also] I want to write about sports and continue to be around football [after my career], kind of like Keyshawn Johnson.” So what has all this success taught Brown?

“Stay humble, because you can lose it as quick as you gained it – that’s the main thing [my family] talks about all the time. I’m the very first person to go to a major university out of my family, so they encourage me to stay focused,” Brown says. “Best thing about being here is being able to say you played at USC. This university is so powerful academic wise and football wise, saying you played here in the Coliseum is one of the best things.”

Aside from football, if you don’t find Brown on the field making plays or at the Palace (a.k.a. his house), you will find him in the classroom.

“One of my best memories here was when I got my first ‘A’ on my Writing 140 paper, because I kept getting ‘Cs’, and I was getting mad because I spent so much time on them, and then I got an “A’ and became a good writer,” Brown says laughing.

Getting to know him as an athlete is one thing, but Brown shares that his favorite movie is Remember the Titans, he listens to all music, but Drake is his favorite, he loves soul food and his favorite color is purple. Aside from that there is one thing Brown wants his fans especially to know.

“It’s going to be a good year; I’m going to give them something they missed last year. I love them, and I’ll never let them down.”