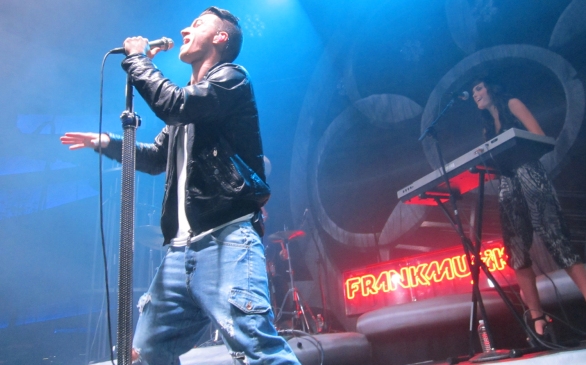 He’s an unassuming guy, you would likely pass him on the street without throwing so much as a second glance. Clad in a simple white T-shirt and jeans with a nondescript buzz cut, Vincent Frank, aka British electro pop wizard Frankmusik, is better known for his creations behind the scenes, having remixed the likes of Lady Gaga and Pet Shop Boys, as well as producing Tomorrow’s World, the new album from the headliner for the night, Erasure. Tonight he bounds onto the stage at the Palladium with a sure-footed air about him, looking like your average bloke but performing like a household name.

His music harkens back to ’90s dance floor anthems, or perhaps gay pride parade float jams. Whatever the case may be, he serves up his specialty: simple pop anthems belted out on an impressive set of vocal chords. But I have to wonder, what is up with all of the vocoder? With a voice this good, do you really need to layer on the effects? It’s a bit like slathering lipstick and mascara on the Mona Lisa. Non-essential. Should it really be auto-tuning that determines which songs get onto the charts? Frankmusik would do well to attempt to turn the tide of this stale notion rather than going with the flow.

Nevertheless, his buoyant pop anthems ignite the crowd. Samples from familiar songs like Paul Simon’s “Call Me Al” and Eurythmics’ “Sweet Dreams” are worked into his own compositions seamlessly. “Better Off as 2” is a stunning showcase for the previously mentioned impressive vocals. And as a special surprise, label mate Colette Carr joins him onstage for the ridiculously catchy “No I.D.” He closes out the night with the club life anthem “Do It in the AM” to thunderous crowd approval. I give it a few months before Frankmusik's stateside popularity is as huge as his stage presence.