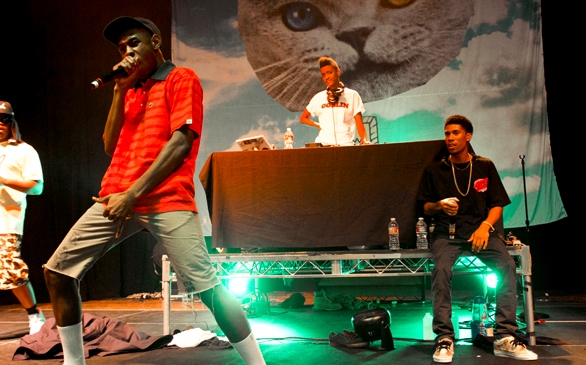 (Credit: Da Ron Jackson)
“Odd Future is like the new Nirvana,” a fan said to me Thursday night at the Hollywood Palladium. And though many may disagree with his statement, the group definitely brings the energy and intensity to its audience at a similar level. Expect no boundaries when attending an Odd Future show. From shoes, car keys and water bottles flying on stage, to crowd surfing, strong profanity, fist throwing and mosh pitting, it’s all a factor.

The weird thing about it is that the fans don’t scream, “Fuck Tyler” and toss items on stage out of dislike, it’s done to show their loyalty to the Odd Future movement. It’s like a powerful colt following along with no respect whatsoever for what’s considered to be (right) in society. You can completely be yourself and let loose with no regards to what is thought of you.

To all hip-hop fans eager for entertainment, I suggest going to one of Odd Future’s shows. But make sure to dress (not to impress) to get down and grimy. Odd Future is about living life and not being so serious all the time. It’s about being youthful and having complete fun!
Article posted on 10/11/2011
This article has been viewed 1214 times.