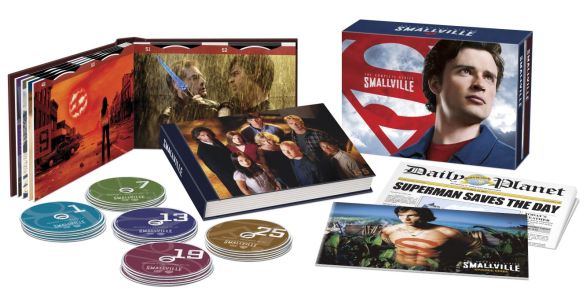 The 62-disc set of Smallville: The Complete Series

The Idiotbox:
Smallville: The Complete Series is a colossal 62-disc set for the superfan collecting all 218 episodes of young Clark Kent’s adventures along with five hours of new bonus features, including an incredible 1961 unaired pilot for “Superboy.” The series follows the teenage Kryptonian (Tom Welling) over 10 seasons as he comes to grips with his destiny as a superhero. This is a beautifully put together set that will please Superman diehards.

Cult favorite Farscape: The Complete Series comes to Blu-ray in a 20-disc set with 15 hours of bonus features including an all-new documentary. The series follows an Earth astronaut who is accidentally sent across the universe and finds himself aboard an alien spaceship on the run from a deadly enemy in a war-torn part of the cosmos. The show features spectacular CGI with some of the best creature effects to date.

Showtime’s terrific ensemble drama The L-Word: Complete Series follows a group of lesbian friends in Los Angeles as they contend with love, parenthood, careers and their supportive and not-so-supportive friends and family. Mia Kirshner stars as a young writer who moves to Los Angeles with her boyfriend and begins to question her own sexuality when she meets her lesbian neighbors. Jennifer Beals, Leisha Hailey and Pam Grier also star.

Inspired by Hitchcock’s To Catch a Thief, It Takes a Thief: The Complete Series was part of the ’60s spy explosion and starred Robert Wagner as the world’s greatest cat burglar who, after getting caught, cuts a deal to work as a spy for Uncle Sam. Premiering in 1968, the series ran for three seasons before becoming a cult classic. This set contains an extended feature-length version of the pilot as well as interviews with Wagner and super producer Glen A. Larson and more.

Culled from 3,000 hours of amazing color film from around the world, World War II in HD: Collector’s Edition is an amazing document, presenting the war as you’ve never seen it before, a ground’s eye view from the front lines. This new edition contains “The Battle for Iwo Jima” and “WWII in HD: The Air War,” detailing the Air Force’s mission to take out the Luftwaffe before D-Day.

One of the most beloved of the ever-changing Doctors, David Tennant’s tenure commanding the TARDIS gets loving treatment with Doctor Who: The David Tennant Years, a gorgeous set containing all of Tennant’s episodes and specials plus the star’s video diary, commentaries and more.

Hey, Sports Fans!
Relive the Cardinals’ 11th championship with two Fall Classic releases: the Official 2011 World Series Film, narrated by St. Louis native Jon Hamm (“Mad Men”) and, for the diehard fan, the eight-disc set The St. Louis Cardinals 2011 World Series Collector’s Edition containing all seven games in their entirety and loads of extras, including recaps, highlights and celebrations. This was a historic comeback season for the club capped with the retirement of legendary manager Tony La Russa.

Special Edition:
Housed within a globe, Planet Earth: Limited Edition brings the monumental, genre-redefining, globetrotting nature series to Blu-ray and DVD with all new bonus features and commentary tracks. Rediscover the world around you with this stunningly photographed series narrated by David Attenborough.