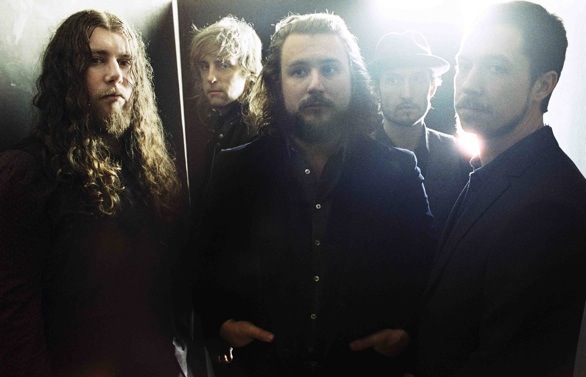 (Credit: Danny Clinch)
It’s a true sign of a great live performer, when technical problems arise yet the show never falters. My Morning Jacket suffered equipment problems as soon as they hit the stage at Gibson Amphitheatre, but didn’t let that stop them from giving the crowd one hell of a show.

Maybe all of the stage equipment was jostled too much from all of Sharon Jones’ strutting earlier in the evening. The funk/soul diva led the crowd through a slew of 1960 dance moves set to the instrumentation of her superfly Dap-Kings, constantly shaking her thang, because “I’ve got on fringe, and I’ve got on Spanx!” It was a shame the crowd was so sparse during their set, but the venue filled out in time for My Morning Jacket’s arrival.

Even as vocalist Jim James apologized and cursed the “technical demons we all have to deal with,” the Louisville quintet kept the energy flowing, capturing the audience’s attention with a setlist consisting of new songs off the Grammy-nominated Circuital (like “Victory Dance,” “First Light,” “Circuital,” “Holdin’ on to Black Metal”) as well as favorites from their five previous albums: “Evelyn Is Not Real,” “War Begun” (1999’s The Tennessee Fire); “Phone Went West” (2001’s At Dawn) “Golden” (2003’s It Still Moves);”It Beats 4 U,” “Off the Record” and “Wordless Chorus” (2005’s Z); “I’m Amazed,” “Smokin from Shootin” and “Highly Suspicious” (2008’s Evil Urges).

Whether he was strumming his acoustic, belting out with his amazing set of pipes, shredding on his Flying V or dancing around in his signature blue cape, James has grown into an impressive frontman. Along with guitarist Carl Broemel, bassist Two-Tone Tommy Blankenship, drummer Patrick Hallahan and keyboardist Bo Koster, James had the crowd singing and rocking out up until the final encore of “One Big Holiday,” proving that despite early tech issues, they are truly one of the best live bands out there today.