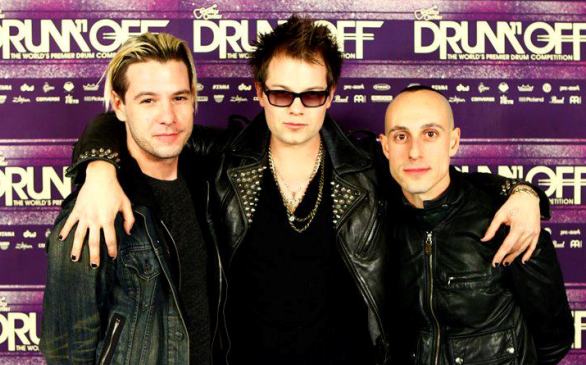 Street Drum Corps
Last Saturday night, Dim Mak Studios, or the old Cinespace, was taken over by Behind The Hype's party with headliner The Street Drum Corps. The night started off with a line down the street and an excited group waiting to get in for the DJ sets, bands and party.

Though they went on about an hour later than planned, the Street Drum Corps is incapable of putting on a disappointing show. Their set was full of energy - like kids let loose in a junk yard. At one point, Adam Alt excitedly took a chainsaw to an old spray painted dryer that he had earlier wheeled to the stage. The set ended with sparks flying from a saw cutting into an 18 wheeler’s metal tubing. I was not even disappointed to find out that I had been walking around with ashes on my face for about half an hour after the show.

Caught a Ghost played midway through the night to an audience full of fans who knew every word. Just named one of L.A.'s bands to watch, they were an impressive presence. With a stage full of band members, they kept the momentum going with their unique and deservedly acclaimed sound. The audience was filled with musicians as well, including fellow "must watch" list staple, Iavan Ives (NO's frontman), who came out to listen to Caught a Ghost and Friend of Das Tapes. Ives then took to the stage for some freestyling of his own.

With Behind The Hype's first event of its kind under their belt, it's clear that there will be more to come.