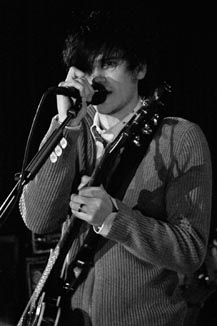 Like modern art, there are a lot of people making emo music, but definitely not a lot of people who actually know what they’re doing. Now, we have two bands quickly ascending in their respective genres, but throw in another two, three, 10 (does it matter how many?) other bands who want to do emo or pop but don’t know the first thing about doing it right, and you’ve got one very long show.

Opening band Jettie wasn’t emo or pop, just monotonously easy to swallow … and just as easy to forget. But, as discovered at the end of the set, it’s not the band’s fault. Its members are from Sweden, so we’ll let it go.

Fellow openers Self Against City didn’t fare better, and didn’t have the language barrier thing as an excuse. Stereotypically whiny, the band’s music played out like any emo kid’s LiveJournal read aloud to backing instruments. Nothing awe-inspiring, but at least it made us give due credit to Jettie, as the Swedes didn’t make us want them to stop after the first song for becoming painfully cliché.

Luckily, after the previous musical homogenization, JamisonParker reminded kids why they paid money for this show. Singer-guitarists Jamison Covington and Parker Case, with a full backing band this time, do stripped-down emo and do it really well. Playing everything from fan favorite "Notes and Photographs" to new single "Best Mistake," the pair had the audience from start to finish. Or maybe Covington just knew how to get the girls to scream. The only problem of JamisonParker’s set was how JamisonCentric it became. The band has such solid musicianship that it’s disappointing to see girls going crazy for just Covington alone, filling the between-song silences with cat-calls and marriage proposals.

Waking Ashland closed the night, and all the opening band mess was forgiven and forgotten as they played. Their upbeat melody and piano-driven pop is music that begs to be sung along to, and Waking Ashland showed it has the likeability to make kids want to sing along. From the emotionally layered "All Hands on Deck" to the infectious "I Am For You," Waking Ashland makes music that ingrains itself in the back of your brain. Hearing the songs performed live reminds you why it is one of the great, (relatively) unknown bands making it in mainstream rock.

If one lesson is to be learned, emo music is, like modern weaponry, only safe in the hands of professionals, not for use by the general public. With legitimately good, sincere bands like JamisonParker and Waking Ashland around, it’s safe to say most others should just put down the acoustic guitars and back away slowly.