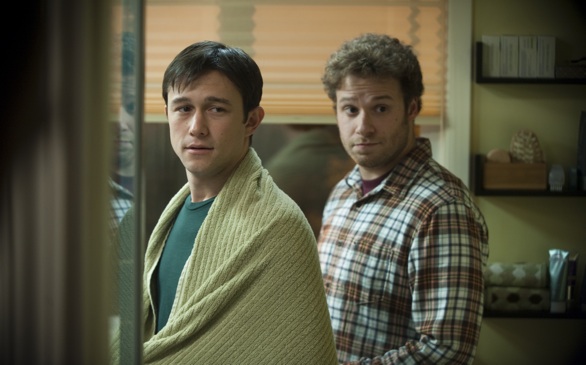 Joseph Gordon-Levitt and Seth Rogen star in 50/50, which is now available on DVD.
(Credit: Chris Helcermanas-Benge)

The Majors: The most distinctive directorial statement of the year, Drive,  is a highly stylized story of a stuntman and getaway driver (Ryan Gosling), who goes to war with the mob.

The Whistleblower is the disturbing true story of a U.N. peacekeeper (Rachel Weisz) that discovered U.S. contractors involved in human trafficking in the aftermath of the Bosnian War.

Ryan Gosling is a young staffer for a charismatic presidential candidate (George Clooney), who gets in over his head with the dirty side of politics in The Ides of March.

Also available: Justin Timberlake in the sci-fi thriller In Time, Richard Gere and Topher Grace star in the spy thriller The Double and the Broadway musical Memphis.

Funny Business: Joseph Gordon Levitt is a young man dealing with the fallout of being diagnosed with cancer in the dramedy 50/50 (Seth Rogan and Anna Kendrick co-star).

The Horror! The Horror! A prequel to John Carpenter’s classic, The Thing shows how the shape-shifting creature was freed from its Antarctic prison and preyed on the original research team.

A married couple (Daniel Craig and Rachel Weisz) moves into a new home only to find it’s haunted. But the ghosts may be somehow related to the family’s past in Dreamhouse (Naomi Watts co-stars).

The Idiotbox: “Star Trek: The Next Generation:” The Next Level offers a sampler of the enormous hi-def remastering project of the continuing adventures of the Starship Enterprise. Included are the feature-length pilot and two fan favorite episodes.

Stranger than Fiction: Before the internet, Peter and Raymond became the first viral sensations when secret tapes of their violent arguments got passed around in Shut Up Little Man! An Audio Misadventure.

Also available: Revenge of the Electric Car, Hell and Back Again, Queen of the Sun: What Are the Bees Telling Us?

Under the Radar: Roland Joffé’s historical epic of faith and war : There Be Dragons.

Spike Lee and Denzel Washington made the perfect pair to bring to life the story of history’s most controversial civil rights leader in Malcom X: 20th Anniversary Edition.

Have a Richard Pryor-athon with classic comedies The Toy, Stir Crazy and See No Evil, Hear No Evil.