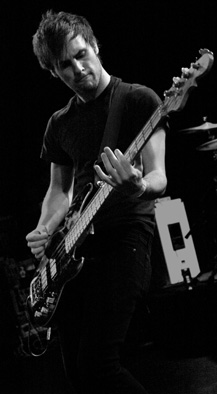 Untitled Document There is so much negative connotation attached to pop these days, maybe because of the countless lip-synching Ashlee Simpsons and trailer trash Britney Spears-esque "musicians" on the market. But every now and then comes an artist that, for all intents and purposes, falls under the pop umbrella without sacrificing any of their integrity or musicianship. What a concept, huh?

It was a long wait through all four opening bands, between the good, like endearingly straightforward rockers Cartel and the immaculately dressed Panic! at the Disco; the not so good, like the emotionally monotonous and dreary Augustana; and the out there, like the atmospheric and screamo-tinged artsy rockers of the Receiving End of Sirens.

Once Acceptance took the stage, though, the sweat and limbs entangled with those of other concertgoers and sore feet from the last three-and-a-half hours of standing all disappeared. There was just the band, the listener and the individual connection the band had with every single listener in the venue.

Opening with lead song "Take Cover" off its major label debut, Phantoms, the Seattle six-piece commended all the energy of the audience from the moment it took the stage.

With a set-list that made for repeat buildups and tension releases, playing out much like the perfect mixed tape of alt-pop, Acceptance seems to have mastered the art of controlled emoting in its live show. From the epically moving "Glory/Us," with frontman Jason Vena’s soaring vocals layered over the subdued, yet powerfully evocative keyboards of Kyle Flynn, to the heartstring-gripping "So Contagious," Acceptance has mastered its craft with the uncontrived honesty that bonds musician to song to listener. Balancing optimistic idealism with empathic realism, the band’s members are masters of controlled emoting with their brand of infectious, hook-driven piano pop.

Slowing down midway through the set, the band broke from its own oeuvre to borrow from a fellow pop band, going decidedly big and covering arguably the most important song ever. It’s the kind of move that either works or fails miserably, depending on how good a band you are, and as Vena let out the first resonating notes of the Beatles’ "Eleanor Rigby," he and his bandmates proceeded to do justice to the forefathers of modern pop and rock. That said, it was entirely disappointing that more kids in the audience didn’t actually know the words to the song – the very roots of what they listen to now.

After performing current single "Different" to more than a few lighters in hand, Acceptance finished its set with a little something for the grassroots fans who have been with the band since long before the video was getting airplay on Fuse. Old-school favorite "Bleeding Heart" saw guitarists Kaylan Cloyd and Christian McAlhaney and bassist Ryan Zwiefelhofer truly shine, shredding harder than you might think pop music permits. Closing the night with "Permanent," the band’s definitive rock-the-fuck-out song, drummer Nick Radovanovic pounded away furiously at the signature beats any Acceptance fan would recognize from a mile away. Any earlier ignorance to classic rock was quickly forgotten as the entire crowd erupted in response to the fan-favorite song, proving that even for as many new fans as the band has gained recently, its ability to inspire such dedication is unparalleled by any other remotely comparable band.

With stage presence and charisma far beyond their years, the Seattle six-piece proved that as good as their music is on CD, seeing them perform live is an entirely different experience. As much as all bands like to talk in trite clichés about being one with their audience, this group genuinely creates something all encompassing and forever binding at its shows. On a small, intimate level, its members do something unforgettable to a few hundred kids every night, something positive at that, which is exactly why Acceptance is by and large the best thing happening right now to pop, rock and everything in between.