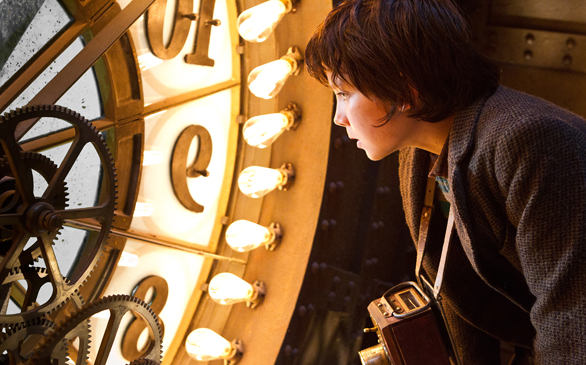 The Majors: Martin Scorsese crafts a loving tribute to early cinema in Hugo. The 3-D adventure tells the story of an orphan who lives inside the clock of a Paris train station, who sets out to solve a mystery involving his late father.

In Clint Eastwood’s biopic, Leonardo DiCaprio embodies one of the most powerful men in American history: the founder and head of the FBI for decades, J. Edgar.

A claustrophobic psychological thriller, Retreat stars Thandie Newton, Cillian Murphy and Jamie Bell as the only inhabitants of a secluded island, as a deadly virus wipes out Europe.

The Idiotbox: A geeky outcast with apocalyptic visions may be the world’s only hope, as a vengeful spirit seeks to tear down the barrier between the dead and living in the BBC series “The Fades” Season 1.

Who better than Tom Fontana (“Oz”) to delve into the psyche of one of history’s great criminal masterminds? “Borgia: Faith and Fear” Season 1 follows the rise of Rodrigo Borgia (John Doman, “The Wire”) in his ascendancy to pope and quest for power against the backdrop of the Italian Renaissance.

Travel back to 1968 as host Joan Rivers chats up a slew of celebrities from Johnny Carson to Jerry Lewis in “That Show with Joan Rivers” Vol. 1-3.

Funny Business: After an unscrupulous “one-percenter” steals their retirement fund, the employees of a posh New York building (led by Ben Stiller) and a petty criminal (Eddie Murphy) use their inside knowledge to get revenge in Tower Heist.

Foreign Fare: World on a Wire (Criterion) was something of a departure for iconoclastic auteur Rainer Werner Fassbinder. The film is an ahead-of-its-time, Philip K. Dick-esque virtual reality tale from one of the masters of New German Cinema.

Stranger than Fiction: Urbanized ventures behind the scenes into the myriad factors at play in designing a city.

Under the Radar: Elizabeth Olsen gives a breakout performance as a mentally scarred woman who escapes from a cult in Martha Marcy May Marlene. John Hawkes is equally electric.

Another great entry into the Last Night of Summer genre, The Myth of the American Sleepover follows intersecting groups of teens on their last night of freedom in a poignant drama.

Channing Tatum is a young cop investigating a murder covered up by a corrupt detective (Al Pacino) in the thriller The Son of No One. Ray Liotta leads a fantastic supporting cast.

Blu Notes: One of Clint Eastwood’s greatest films comes to hi-def. Unforgiven is a revenge western in which a couple of old gunslingers (Eastwood and Morgan Freeman) join a naïve wannabe to seek justice after a prostitute is disfigured. Gene Hackman and Richard Harris co-star.