Sondre Lerche: May 30 @ the Troubadour 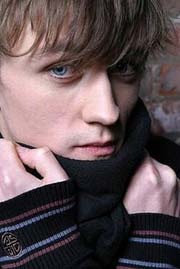 Chances are that you’ve probably never heard of Sondre Lerche, the 21-year-old Norwegian singer who’s quietly been making a name for himself with his sad, introspective love songs. But the soft-spoken singer was more than a familiar face to a sold-out crowd at the Troubadour when he performed songs off his new album, Two Way Monologue, as well as old favorites like "Suffused with Love," from his debut album Faces Down.

Departing from his albums’ mellow sounds and opting for an edgier, live rock sound, Lerche and his band The Faces Down revved up the audience with songs like "On the Tower" and "Days That Are Over," a deliriously sunny, upbeat song infused with heavy guitar and drums. Lerche also played more gentle, acoustic songs like "It’s Over." Even with the singer’s less-than-perfect English, Lerche had no problem connecting with and charming his audience.

Opening act Charlotte Martin, reminiscent of singer/songwriter Tori Amos, was also a crowd-pleaser. Martin’s passionate piano playing, coupled with the strength and range of her voice in songs like "Limits of Our Love" and "Up All Night," was mesmerizing and worth watching.