Chris Paul's L.A. Act is the Stuff they Make Movies About 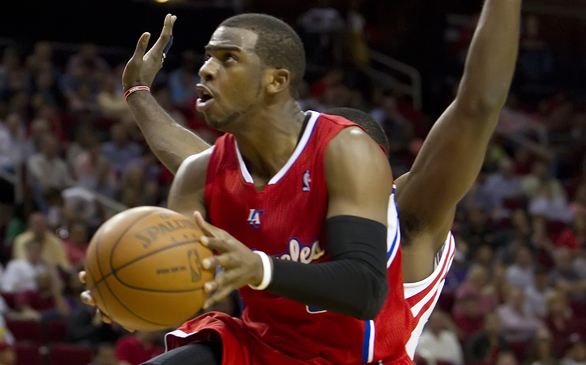 Every time he opens his mouth I fear it might lead to disappointment, so far the Clippers' Chris Paul an absolute wonder, coming across as good a guy as he is an unbelievable basketball player.

And here I am talking to him again Monday, an off day, just because it's fun, and that's why I got into this business.

Paul makes it seem so easy, which makes it even more ridiculous when others make it so hard to just talk sports.

He is as confident of his own abilities as any athlete I have met and yet he seems to spend much of his time dwelling on what he does wrong.

For example in basketball circles it's pretty well known he jabbers a lot on the court, someone likening him to a yapping dog.

Instead of getting all defensive and even testy when relaying that to him, he says it's not only true, but admits he gets on the nerves of those around him.

"And sometimes it can be overwhelming," he says with a grin suggesting he's not exaggerating.

He's a rarity as pro athletes go, and maybe one day yet he goes sour on everyone. Just please don't tell me, as I'm now rooting for him to make it big here in the entertainment capital.

He found a way to meet DiCaprio, of course, his quest to find someone in L.A. shorter than him now complete.

He also talked to Weinstein, and I wonder if he told Harvey he had been in a movie.

It might have been a little awkward, considering Harvey made the film, Hurricane Season, and probably didn't know Paul was in it - 79 actors credited online with being a part of the cast, but no mention of Paul.

He played himself but apparently not well enough to be noticed.

It wasn't surprising then to learn he got nowhere with Salma, and he probably has no shot without getting an assist from Page 2.

I'm not surprised; it takes a lot to rock her world.

Salma and I go way back - even before my critically acclaimed appearance in the box office hit, The Game Plan. I would guess a call will be coming from Harvey any time now, although I was expecting it earlier while he was making his silent movie.

As actors do - every time Salma and I get together we kiss.

"Kiss you where?" a flustered Paul wanted to know, as if it's any of his business.

"I should have told her that I know you," says Paul, while quickly adding, "Kevin Hart is one of my best friends."

As name-dropping goes, it is one thing to say I'm best friends with somebody nobody has heard of, quite another to say Salma and I are kissing buddies. I understand now what it's like to be a small man and dominate.

I would have done my best to get Salma to a Clippers game, probably having to tell her this was her only chance to meet Ralph Lawler, but that was before Chauncey Billups got hurt.

I thought the Clippers had a legitimate chance to make it to the NBA final four, but not now.

"I'm not afraid to say this," says Paul. "When Chauncey went down I was hurting. I was devastated. I'm sure the night he got hurt it hadn't set in for him, but I was tore up. That shows you the love I have for him.

"There was no doubt in my mind we were going to win this championship with Chauncey."

But without Billups this isn't the same team. Randy Foye lacks consistency as his replacement, Caron Butler's jump shot is falling short and so much is riding on Paul, or Paul getting the ball to Blake Griffin.

"I still believe and know we can win it," Paul says, "but it just got a little tougher."

So here we are, Tuesday night in Staples Center, and while Paul has made the Clippers relevant again, can he keep the momentum going and stay ahead of the Lakers?

"Say what you want right now about the Lakers, but try to beat them four out of seven times in the playoffs," says Paul. "That's the way you have to think. Now is when the intensity increases."

Paul went eight for 11 in the second half against Denver to send the Clippers into the All-Star break with a win. He was six for seven in the first half against Minnesota on Tuesday to let his team know there would be no letdown.

Those are MVP numbers, a blubbering Mike Smith telling a Clippers' TV audience, "in a year where The Artist was the best film, how appropriate Chris Paul came to L.A."

The same could be said about Paul had he been traded to any other city, but that's what happens when folks run out of fancy words to describe the effect Paul has had on the Clippers.

This disastrous showing against Minnesota was very disturbing given the number of road assignments ahead.

The Clippers not only were embarrassed, but that was Michael Beasley - possibly headed to the Lakers - throwing in 27 points off the bench.

As if he doesn't already do almost everything for his team, it was Paul to the rescue afterward.

"I'm not panicking," he says, but if he's going to become as big here as his personality, he's going to need some help from his sidekicks.

Or what a waste.