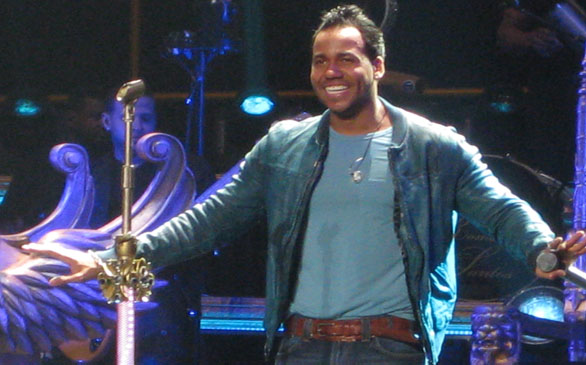 The king of modern bachata Romeo Santos made his way to Los Angeles with his Formula, Vol. 1 tour, stopping at Staples Center for a one night sold out performance that left the audience wanting and asking for more.

Making a scenic stage entrance, Romeo rose from the middle via a gigantic throne. Dressed in light and dark grey attire (and shades), Romeo began the show with “You,” which immediately sparked ecstatic cheers from the crowd. The song served as a perfect opening with its romantic yet upbeat lyrics and tone.

“La Diabla (The Devil),” off of his Formula, Vol. 1 album, was followed by numerous hits from his Aventura days, including “Por Un Segundo (For A Second),” “Su Veneno (Her Venom)” and “Mi Corazoncito (My Little Heart),” among several others. The highlight of the show was his performance of “Los Infieles (The Unfaithful Ones)" -- the thousands present lit up the atmosphere with nothing short of excitement, errupting with screams and claps.

One of the most captivating moments of the show was his performance of “Debate de 4 (Debate of 4).” On his solo album, Romeo collaborates with three pioneers of bachata: Anthony "El Mayimbe" Santos, Luis Vargas and Raulín Rodríguez. However, during this show, three random guys from the audience came to the stage to sing the melody with him. It was a surprising moment -- one that is rare to see in a live show -- but the result was actually very entertaining.

After a quick outfit change, Romeo performed a hip hop/techno track entitled “Magia Negra (Black Magic)” and two other songs. He then left the stage inexplicably, only to reappear in the middle of the venue so he could unite and share with the crowd. He stayed in the audience for nearly 15 minutes, delivering five performances from his early days with Aventura. “Obsesion (Obsession)” was the last sung, and it left people crazy with excitement before he disappeared before his next set.

His next sequence of songs featured a lone yet joyful piano set, highlighting “Rival,” “Angelito (Little Angel),” and “Soy Hombre (I Am A Man).” This part of the concert served as an intimate portrait of Romeo, who is 30 years young and enjoying a successful career at the helm of his innovative ways of composing and singing.

Romeo connected with the audience once again, asking fans to pitch in personal requests, which resulted in three distinguished performances of Jose Jose’s “Lagrimas (Tears),” “Me Voy (I’m Leaving),” and “All Aboard.”

Near the finale, which saw Romeo in his fourth set of fashionable clothes, he reappeared amazingly more energetic than before. The final set included “El Malo (The Bad One),” “Mi Santa (My Saint)” and “Un Beso (A Kiss),” before closing out with the contagious “Promise.” The beginning of “Mi Santa” carried an unexpected opening of a flamenco dancer, which was just epically beautiful.

Romeo's performance was boosted by a live orchestra, which featured 12 musicians and one extremely sexy back-up singer, carrying the energy needed to provide instrumental explosions on stage. And Romeo, of course, was full of explosive energy himself. He danced and smiled, and profoundly connected with each song and every section of the venue, while captivating the hearts and minds – not to leave out souls – of many.

Indeed, Romeo showed L.A. the creativity he possesses, not only in writing and singing, but also in his outstanding ability to perform and please those in attendance. Within the Latin community, he is beyond loved, and that could soon be the case universally if he decides to eventually make the full cross-over.