Of Monsters and Men: March 20 @ The Troubadour 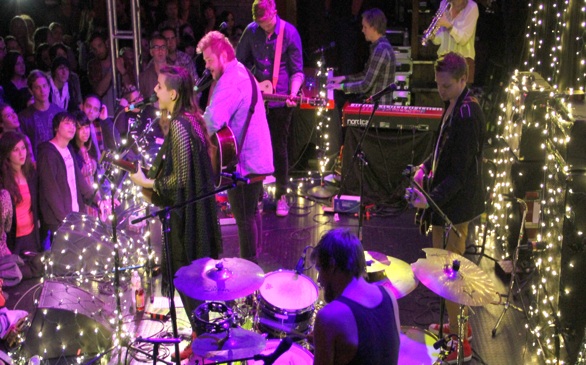 Bands nowadays rarely play covers, but Of Monsters and Men had no problem covering the Cure's "Close To Me" at their recent show at West Hollywood's Troubadour. With their own style and rendition of this classic tune, they definitely kept the crowd on their toes.

The concert marked the kick-off of their U.S tour, with fans of this Icelandic band making sure it was a strong start with a sold out show. Of Monsters and Men comprises seven bandmates --two girls and five guys --and despite their numbers, they were all in sync and in harmony with one another. The indie folk sounds were led by the gentle strums of the guitar, accompanied by the loud pounding of the drums and delicate duet of the girl and boy lead singers.

The band charmed the crowd not only with their music: The lead singers kept cracking jokes and engaging with the audience. Having recently performed at SXSW, the group seemed to carry over their positive energy from Austin as they were on stage.

The highlight of the show came during the song "Little Talks," when the vibrant sounds of the trumpet had the crowd enthusiastic, yelling “HEY!” along with the tune.

Of Monsters and Men will continue their U.S. tour with more sold out shows, and are definitely worth checking out.

To find out when Of Monsters and Men are coming to a town near you, check out the band's Myspace page.