The Used: March 27 @ The Troubadour 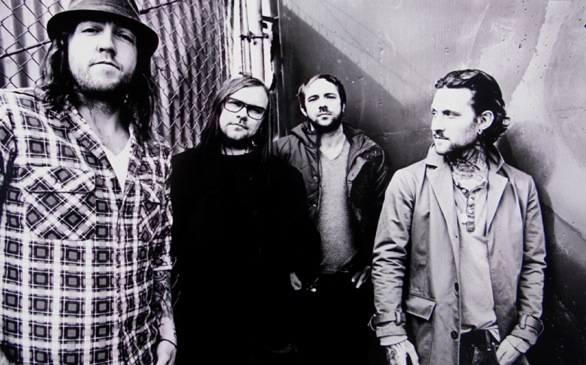 Tuesday night Rdio presented the Used’s live release party celebrating their fifth album, Vulnerable. Lucky fans lined up at West Hollywood’s Troubadour as early as the afternoon, excited to support their favorite band. When nightfall rolled around, eager attendees were let into the intimate venue that gave them the unique opportunity to see a once-in-a-lifetime performance.

As soon as the band made their way to the stage, the anticipation of the fans rose to a fever pitch. And when lead singer Bert McKracken took the stage, the Troubadour erupted as the music began.

The set started out with a selection of tracks from the band’s new release, and already many fans knew every line. Already a favorite, “I Come Alive” elicited a riot with a new energy different than some of the Used’s former work. The tone of their new material was not as dark as some of the older albums, such as In Love and Death, showing that the Used  is an evolving act that can keep a crowd on their feet.

To assuage the audience's desire to hear one of their favorites, the band played “The Taste of Ink,” which took everyone back. It was definitely one of my anthems growing up, and I passionately joined in the chorus, “Here I am, It’s in my hands and I will savor every moment of this. Here I am alive at least and I’ll savor every moment of this.” Everyone definitely savored every moment of the show, and just when things seemed like they couldn’t get any better, William Francis (Aiden/William Control) joined McKracken for the song he did guest vocals on.

The band then continued through all the new tracks. There was never a dull moment, and the music elated the audience with its new stories and rhythms.

A highlight of the concert actually came in between songs, when McKracken called a fan’s mom, who promptly hung up on him after he said, “Hey, mom it’s Bert!” He then went on to call his own mother, who called the fans in attendance "a whole buncha kiss-asses!”

McKracken noted that it had been 10 years since they last played a free show at the Troubadour. After thanking fans for their support, the band closed the show with “On my Own” and a hands-down crowd favorite, “Box Full of Sharp Objects," which even brought out William Francis again to join the house in performing the anthem.