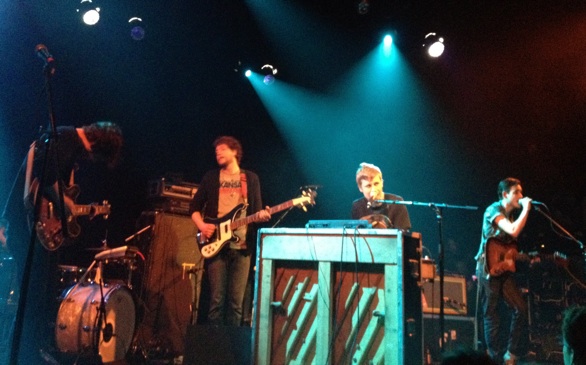 At the rate at which new bands are popping up these days, carving out space in the ultra-competitive indie rock scene isn’t quite as easy as it used to be.

Just tell that to White Rabbits.

For the Columbia, Missouri-turned-Brooklyn sextet, standing out amid its sonic counterparts may be its biggest obstacle to overcome right now.

It’s not that they don’t have the right tools in the toolbox to distinguish themselves from the rest of the pack; it’s just hard listening to White Rabbits without thinking of indie giants Spoon and Phoenix, too.

The similarities, of course, are not a complete surprise, considering the band enlisted Spoon lead singer Britt Daniel to produce its second record, and Mike McCarthy (who served as producer on Spoon’s Ga Ga Ga Ga Ga and Gimme Fiction) for their latest full-length effort, Milk Famous.

McCarthy’s influence is evident on the 11-track release that has you wondering if you’re actually listening to an album by Phoenix, but White Rabbits do their best to downplay those recurring comparisons in a live setting.

Playing to an intimate room of fans at the El Rey Theatre, White Rabbits performed a strong mix of both old and new tunes. They opened with their new single, “Heavy Metal,” and delved into a solid chunk of material from Milk Famous over the course of a 75-minute set, but they also didn’t shy away from their roots, performing a collection of songs off Fort Nightly and It’s Frightening. By the end of “Percussion Gun” — still White Rabbits’ biggest hit to date — the crowd yearned for more during the brief encore break that ensued.

Throughout the performance, it was pretty clear that frontman Stephen Patterson’s soulful melodies were the band’s bread and the thunderous rhythms coming from drummers Jamie Levinson and Matthew Clark were its butter.

If White Rabbits can stick to that simple recipe, finding the identity they’re still searching for may come a bit easier in due time.