We Bought a Zoo, The Iron Lady, A Streetcar Name Desire and More 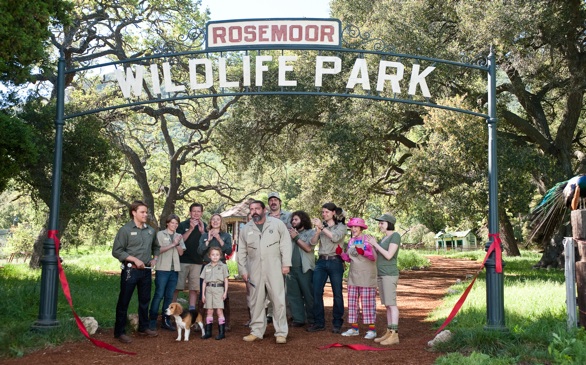 The Majors: Cameron Crowe directs We Bought a Zoo, a poignant dramedy about a father who uproots his family to take over a failing zoo. Scarlett Johannson and Thomas Haden Church co-star in this all-ages adaptation of the best-seller.

Meryl Streep adds another powerhouse performance (and Oscar) to her name with The Iron Lady, a biopic of Britain’s only female prime minister, the beloved and reviled Margaret Thatcher. Jim Broadbent co-stars.

Quickly becoming one of Hollywood’s most sought-after actors, the versatile Michael Fassbender tackles another challenging role in Shame. Fassbender plays an emotionally cutoff New Yorker who seeks solace in his sex addiction. But when his similarly damaged younger sister (Carrie Mulligan) moves in, she threatens his isolation.

Emile Hirsch leads a group of young heroes out to save the world from alien invaders who have turned our electric grid against us in the special effects spectacle, The Darkest Hour.

The Idiotbox: Master of the absurd Chris Elliott is back with “Eagleheart,” a parody of Walker, Texas Ranger-style cop shows. Maria Thayer and the hilarious Brett Gelman back up the trigger-happy U.S. Marshal.

The Horror! The Horror!: Scott Eastwood (son of Clint) is one of three strangers who find themselves at a mysterious cabin in the woods in the thriller Enter Nowhere. Now the group must discover the key to its shared past in order to survive.

Foreign Fare: Italy’s Hitchcockian thriller The Double Hour cleaned up at the Venice Film Festival. A former cop, unlucky in love, falls for a Slovenian immigrant, but things quickly spiral out of control when her dark past resurfaces.

Stranger Than Fiction: Werner Herzog continues to mine real life for fascinating drama with the documentary Into the Abyss, an exploration of murder and capital punishment seen from all sides, from a Death Row inmate to his victims’ relatives to a state executioner.

Go behind the scenes of the creation of a cultural icon in Being Elmo: A Puppeteer’s Journey. Whoopi Goldberg narrates creator Kevin Clash’s inspiring journey from the streets of Baltimore to “Sesame Street.”

The Sun Came Out: 7 Worlds Collide Again is a behind-the-scenes look at some of music’s biggest names getting together to write and record an album for charity. Eddie Vedder, Wilco, KT Tunstall, Radiohead’s Ed O’Brien and others offer a fascinating look into the creative process.

When the Drum is Beating is a powerful portrait of six tumultuous decades in Haiti through the eyes of a 20-piece band that has survived dictators, poverty and natural disasters.

Under the Radar: The inside story of perhaps the most infamous Ponzi schemer since, well, Ponzi, Bernie Madoff comes to the screen in Chasing Madoff. This dramatic thriller for Occupy sympathizers follows a lone securities analyst in his decade-long investigation.

Blu Notes: “Stella!” Marlon Brando became a legend and ushered in a new era of acting with his starring role as a brutish layabout in Elia Kazan’s adaptation of A Streetcar Named Desire. This 60th anniversary edition is loaded with bonus materials.