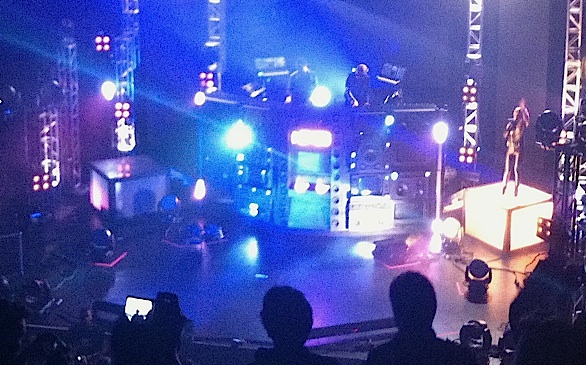 It’s impossible to talk about the dubstep genre without mention of Nero, the U.K.-based duo that has taken the electronic dance music scene by storm. Between performances at both weekends of Coachella, Dan Stephens and Joe Ray brought their beats to Los Angeles, playing a sold-out show at Club Nokia at L.A. Live on April 19.

Following a high energy set by German sensation DJ Zedd, the producers/remixers/DJs appeared onstage high atop a colossal DJ booth, decked out with giant speakers and TV sets. Wearing dark wraparound shades and black leather jackets, the duo looked more like badass superheroes than DJs, ready to save the crowd with their infectious sounds.

The show opened with “Guilt,” and Nero was joined onstage by singer Alana Watson, whose voice sounded surprisingly just as good live as on the recorded track. This segued into “Innocence,” the first single off their Welcome to Reality album, with “BE MINE” flashing on the set’s TV screens every time the hook dropped.

The screens behind the DJ booth lit up with images zooming through outer space accompanied by the pounding beats of “In the Way,” taking the crowd on a trippy Disney-like ride made even more disorienting by dizzying strobe lights.

Watson came back on stage, dressed in all black with her long blonde hair swept to one side, to perform “My Eyes,” which was followed by a mash up of “Reaching Out” and “Promises.” Green laser lights swooped over the audience, who pulsated along with the song’s synth-heavy dupstep beats. The crowd went wild when Watson performed “Promises.” She shouted out to the crowd, “Sing it with me!,” who roared with approval and gladly obliged.

After playing their hits “Crush on You” and “Me and You,” Nero exited the stage as the screens behind them displayed a starburst, and the stage went dark. However, the show wasn’t over, as they re-emerged to play an encore of “Guilt.”

The set lasted nearly an hour and a half, and though it was definitely high energy, it was a bit odd that Nero did not once address the crowd. This didn’t seem to bother those in attendance, however, who were wholly immersed in the music from beginning to end.