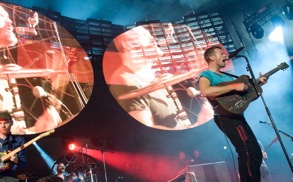 Coldplay was one of the many acts that took the stage.
(Credit: Tamea Agle)

Only a very short time after the music world lost the great MCA, musicians and music lovers alike gathered in Southern California for a night of great music. Most sets had a sombre moment to remember the loss of the Beastie Boys member, but in true rock fashion, there were no moments of silence, only songs and cheers to celebrate the way he would have loved it.

The day began on a smaller stage with Awolnation, Walk the Moon, GroupLove and Of Monsters and Men. While GroupLove’s bass player had some technical difficulties, they took it in stride and went on with a great set. Awolnation in particular seemed to be having the time of their lives, and the audience was happy to join in.

The main stage for the night had a perfect line-up, and the guest band did not disappoint! Soundgarden came out late in the evening to a standing and screaming crowd. Every set was great, but personally Incubus and Coldplay were my favorites. I had seen Incubus a couple years before, and I fell for their live show. They combine insane energy with beautiful solos by each member, particularly on their new song “In the Company of Wolves.” If you get the chance to see their show on tour this year, go; you will not regret it!

I had never seen Coldplay live before, and moments before they came onstage a roadie came up to me, pointed at the floor and said, “That’s pyro, watch yourself.” It was a great way to start the set: a mini explosion was followed by confetti blasts and giant beach balls for the audience to play with. Though they have been playing huge venues for years, Chris Martin still seems to have an absolute blast on stage, and it is contagious.

With the ups and downs brought on by the loss of MCA and the great shows, it was all in all a great way to spend Cinco De Mayo. Cheers KROQ for another great festival.