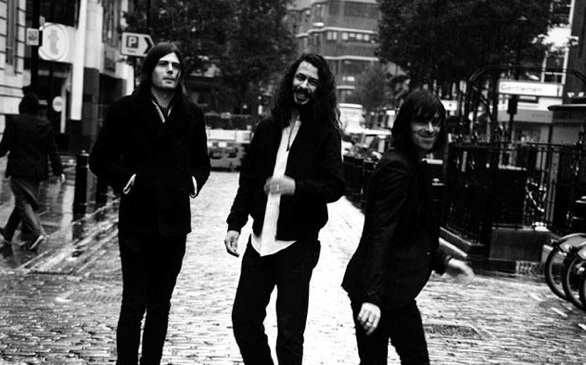 This past Thursday at the Bootleg Theater, Little Barrie rocked out to kick off the first night of their small tour this month in support of their latest studio album, King Of Waves. After a break from performing together, some of their more loyal fans might have had a little bit of skepticism as to what to expect that evening, but those thoughts were soon laid to rest as Little Barrie took the stage with full force, serving up a crowd-pleasing dosage of energy that grew stronger as the night went on.

For those unfamiliar with the trio, these boys hail a little ways away from across the pond in Nottingham, England, and include Barrie Cadogan (guitar/vocals), Lewis Wharton (bass), and their newest addition, Virgil Howe (drums). Their sound is described as a mixture of R&B, blues, funk and soul, combined in a way that stuns the ears with a jam band sound truly unique in its own right. After achieving success in the mid 2000s with their first two albums, We Are Little Barrie and Stand Your Ground, the band has finally returned to shock us with their sound once again. Giving the West Coast music scene a taste of the U.K.’s flavor, the band hit L.A. with their latest effort, and it was no surprise that the locals were impressed and enthused by its delivery.

Little Barrie put on one hell of a show with an ear-melting blend of surging sounds that elated the souls of the audience and had them screaming for more! As the night progressed, Little Barrie’s showmanship neither waned nor faltered, but produced more entertainment for the audience with crazy wailing drums, sonic strokes of madness from the bass, and even over-the-head guitar solos from Barrie Cadogan. It was no doubt this was the place to be in Los Angeles that night.

It seemed the crowd couldn’t get enough of the band’s new songs off King Of Waves. With songs like “How Come?,” “New Diamond Live,” “Surf Hell” and “Now We’re Nowhere,” the band’s performance got the blood pumping and bodies moving on the dance floor all evening. And from the aftermath of hipsters all making their way to the back porch for a smoke break or casual chit-chat between bands, it’s all they could talk about.

It was a great mini-victory for the band, but it will only be the beginning, as Little Barrie heads to Seattle, Portland and San Diego to continue support for King Of Waves through the beginning of June, after which, they’ll then go on another mini-tour through Europe.

If you were part of the sad collective not “in the know” of their Bootleg performance, you can always find their music on iTunes (check the U.K. version), or check on the band’s Facebook or band Web site for more tour dates to see when they’ll be back in Los Angeles to shake up our fair city once again.